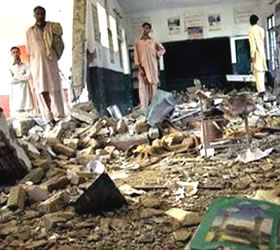 GHALLANAI:Three more primary school were blown up on Sunday by unknown people in different areas of tehsil Safi the other night, sources said.Sources said that some miscreants planted explosives under the buildings of government Girls Primary School Malik Ghulam Habib in Ziarat Killi, tehsil Safi in the night between Saturday and Sunday and blasted the buildings at different times of the night.As a result the remaining buildings of the already affected schools collapsed and got completely destroyed. Another GGPS, Noor Shali, in Said Khan Kor and government Primary School Malik Nabi Shiekh were dynamited in the same area. The number of destroyed schools in Mohmand Agency reached to 56.No one has claimed responsibility for blasting the schools till compilation of this story.However, Tehrik-e-Taliban Pakistan has earlier been claiming the responsibility of destruction for most of the schools and other government installations.In the recent wave of schools destruction, the militants have started targeting the schools that have once been destroyed but the remaining rooms and other parts were now destroyed﻿ – Sananews