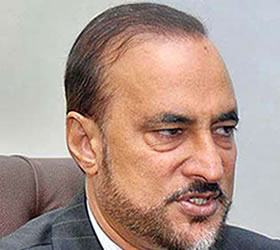 LAHORE: Holding the Pakistan Muslim League-N responsible for only partial implementation of the Charter of Democracy, the People’s Party has offered to fully implement it if the PML-N retracts the steps against the accord.The offer was made at a press conference by Law Minister Babar Awan here on Sunday who said he wondered why ‘rights’ of smaller provinces were being challenged only in Lahore (High Court).He said that the prime minister had rightly pointed out that 80 per cent of the charter had been implemented and the rest could not be addressed because of PML-N’s three steps which were against the spirit of the CoD.He said the steps which needed to be retracted were backing out of a promise made during preparation of the 18th Amendment to set up a federal constitutional court, violation of a CoD article regarding each other’s respect by employing (as Punjab prosecution secretary Rana Maqbool) a person involved in a murder attempt on President Asif Zardari and also hiring the services of Gen (retd) Ziauddin Butt who was the root-cause of the Oct 12, 1999, incident.Praising the PPP-led federal government for purging the Constitution of all additions made by army rulers and providing financial autonomy to the federating units under the National Finance Commission award, he said this could be done only because of a firm resolve of the party leadership.

Answering a question, he said the government would welcome a long march by the PML-N. The question related to Punjab Chief Minister Shahbaz Sharif’s threat of a long march in protest against the appointment as the National Accountability Bureau’s Chairman of Justice (retd) Deedar Shah.Mr Awan said consultations about the appointment had been held with the PML-N as was evident from a letter to the prime minister by the Leader of Opposition in the National Assembly, Chaudhry Nisar, rejecting Justice Deedar’s nomination.He argued that in this case consultation with the prime minister and the opposition leaders in the National Assembly and Senate was not binding on the president.“Clause 6B(ii) of the NAB law asks, and does not order, the president to seek consultation. That is why Prime Minister Yousuf Raza Gilani had to say that he did not give advice to the presidency on the subject.”

He said PML-N chief Nawaz Sharif had once termed Justice Deedar his saviour in the hijacking case and now his colleagues were questioning the integrity of the former judge.He said Justice Deedar had been a PPP MPA before taking oath as an SHC judge, while his party had never objected to a councillor becoming a judge — an obvious reference to the LHC chief justice. When pressed to elaborate, he simply said: “A councillor is always a councillor.”
Referring to a writ petition filed in the LHC against the NAB chief’s appointment, he said it would give a message to smaller provinces that whatever they would do could be dragged into litigation by Lahore.He said he would like to ask why all high-profile cases were being filed in the LHC.Mr Awan criticised former prime minister Nawaz Sharif for using planes and helicopters of the federal and provincial governments during his recent visits to flood-hit areas although he was not authorised to do so.

Asked if the government would hold accountable the institutions that had allowed this violation, he said Mr Sharif should himself come forward to explain the violations and only then the government would think of fixing liability.About taunts of the PML-N about the PPP not quitting the Punjab coalition, he said the masses had given the party the mandate to sit on the treasury benches as the second largest party in the provincial assembly – Dawan