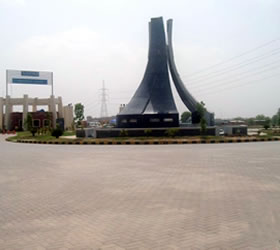 LAHORE (October 07 2010): Foreign diplomats from 27 countries visited Sunder Industrial Estate here on Wednesday. The diplomats are in Pakistan to attend a course at Foreign Services Academy Islamabad. They were given a briefing at Punjab Industrial Estates (PIE) Head Office. They also visited some of the factories.Chief Executive PIE, Major General Tariq Javed (Retd) informed the visitors that more than 250 additional industrial units would come into production in the next 18 months in Sunder Industrial Estate including some multinational companies. Presently, 107 industrial units are in production including 20 multinational companies while 103 are under construction and 246 are at different stages of construction.The CEO PIE said that the PIE was also focussing to achieve greater co-operation of Chinese, Turkish and Iranian companies through joint ventures. He also explained that PIE had planned to establish six new industrial estates across the province of Punjab.These industrial estates will be established at Rahim-Yar Khan, Kasur and Sargodha during first phase while at Bahawalpur, Rawalpindi and Sheikhpure would be constructed during second phase. During the visit of export-oriented industries at Sunder, the foreign diplomats were impressed by the standards of manufacture and state-of-the-art techniques being used. “This visit will pave the way to bring Pakistan’s industries in focus,” the diplomats observed.

The diplomats appreciated the PIE management’s efforts to provide maximum facilities to industrialists. A number of them showed keen interest to learn from Punjab Industrial Estates (PIE) experience and explore avenues of mutual co-operation.While sharing future plans of development, the CEO PIE explained that special efforts were being made to bring under developed areas of Punjab at par with others. Director General Foreign Services Academy Khalid Aziz Babar hailed the excellent services rendered by PIE on the occasion – Brecorder

DAWH: Return to profitability on higher profit from Associates & no impairment

DAWH: Return to profitability on higher profit from Associates & no impairment