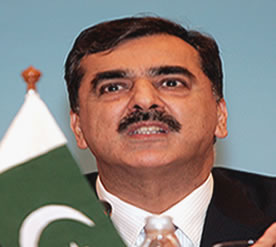 ISLAMABAD, Oct 5 (APP): Prime Minister Syed Yusuf Raza Gilani on Tuesday lauded teachers for their role in Pakistan’s struggle against terrorism and in providing relief to people in natural calamities like floods. Speaking at a function organized by National Commission on Human Development (NCHD) to celebrate Teachers Day, he said the teachers have a role to help create an Islamic and moderate Pakistan which promotes welfare of the people.

Gilani said the nation stood like a fortified wall against the menace of terrorism and extremism.The efforts of teachers in this struggle to make Pakistan impregnable against terrorism were noteworthy, he added.He said Pakistani nation faced the calamity of floods with courage and teachers and students were in the forefront to help affected people in starting a normal life.The prime minister said teachers play an important role in the  progress and prosperity of a society. Teachers are the vital link in character building and achievements of students in their practical life.Teaching is a profession of prophets and teachers bring about revolution in individual lives and set destiny of nations, he said adding it is not possible for a nation to make progress without education.
He said the government is committed to increase facilities for teachers and better their working conditions.
“Our teachers are not behind anybody in their capabilities.”
He said he instructed the Federal Directorate of Education to make educational institutions in Islamabad a model for others.And then these higher standards should be applied in the whole country, he added.The Prime Minister said he as aware of the issues of the education system and his wish is that teachers should get all the facilities and live a comfortable life.
“If teachers are not having facilities then they cannot concentrate on imparting education.”
He referred to contributions of his father Makhdoom Alamdar Hussain Gilani and family in establishing educational institutions in Multan.He said the education policy announced by government carries a lot of incentives for teachers and their pay has also been raised by 50 percent.Efforts are afoot to raise status of teachers as enjoyed by doctors and engineers and other professionals, he said adding various programmes are continuing to enhance capabilities of teachers through training.The Premier stressed on teachers to adopt modern trends of teaching to improve quality of education.The Prime Minister announced that from next year October 5 will be observed as the National Teachers Day and the activities to appreciate services of teachers will continue for a full week.
Showing his witty side, the Prime Minister said sometimes he goes way ahead of others in his efforts to promote politics of reconciliation.Pir Pagaro was his first teacher who taught him to work less for more profit and now PML-Q which has 50 members has merged in PML-F which has five members in National Assembly, he said.Federal Minister for Education Sardar Aseff Ahmed Ali, Chairperson National Commission for Human Development (NCHD) Nafeesa Shah and Special Assistant to Prime Minister on Social Sector Shehnaz Wazir Ali also addressed the audience – App

Farmers to be provided seeds, fertilisers free of cost

Govt believes in across the board accountability: PM

Govt believes in across the board accountability: PM