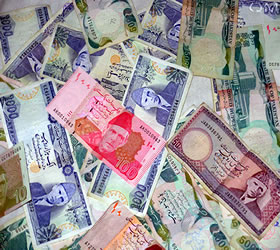 LAHORE (October 06 2010): The Governing Body of Lahore Development Authority (LDA) on Tuesday approved Rs 2.19 billion deficit budget for fiscal year 2010-11; collective income of LDA, Wasa and Tepa has been estimated at Rs 11.29 billion against expected expenditures of Rs 13.48 billion. The collective expenditure includes Rs 6.90 billion, earmarked for development works, disclosed a LDA’s official.It is pertinent to mention that this is the first LDA budget that has been approved after the wrapping up of local government system in the province. Also, the LDA was scheduled to table its budget for approval in September, but it was delayed due to recent floods.

Meanwhile, District Co-ordination Officer and LDA Chairman Sajjad Ahmed Bhutta, chaired the budget meeting of LDA, which was attended by LDA Director General Omer Rasul, Headquarter Director Socrat Aman Rana, Wasa Managing Director Dr Javed Iqbal, LDA Additional Directors General Hafiz Ihsan Ul Haq and Mansoor Qadir, and representatives of the provincial local government, housing and finance department besides administrators of the nine constituent towns of the City District Lahore.Total income of LDA has been estimated at Rs 7.4 billion against the expected expenditures of Rs 6.2 billion. This amount will also include development expenditure of Rs 4.4 billion. For the development of housing sector, LDA will spend Rs 66.8 million for the development of necessary infrastructure in housing schemes for government employees, LDA Avenue-1. It will also spend Rs 150 million for undertaking remaining works in other housing schemes of LDA in the city.

Moreover, LDA will incur an expenditure of Rs 1.24 billion for the construction of new buildings during the fiscal year 2010-2011. A sum of Rs 830 million has been earmarked for the building two car parking plazas in Liberty Market. An amount of Rs 150 million has been allocated for erection of LDA offices, Rs 50 million will be utilised for priority works and an another Rs 50 million will be spent for construction of Nawaz Sharif Sports Complex, Gujjarpura. Rehabilitation of M. M. Alam Road will also cost Rs 50 million to LDA during the new financial year.Under the Lahore Rehabilitation Programme, a sum of Rs 818 million will be spent on different projects. These projects include construction of Madar-e-Millat Road from Pindi Stop, Maulana Shaukat Ali Road to Ghazi chowk College Road at a cost Rs 580 million and construction of Main Boulevard Gulshan-e-Ravi from Multan Road to Bund Road with a total of Rs 47 million.

Completion of development projects under the Punjab Government’s Annual Development Programme will be carried out with an expenditure of Rs 920 million. These projects include construction of new roads from Babu Sabu to Multan Road via Sabzazar at a cost of Rs 245 million, construction of Bhogiwall Road from GT road to Bund Road at a cost of Rs 242 million as well as construction of structure road from Khyiaban-e-Jinnah to Valancia Town at a cost of Rs 180 million. Widening of Road from UBD Canal to Shadewal Chowk, Johar Town, will be carried out at a cost of Rs 120 million whereas repair and maintenance of internal roads of LDA Housing Schemes will cost Rs 490 million.Meanwhile, Wasa is excepting total receipts of Rs 3.78 billion in the financial year 2010-11, while it will spend Rs 4580 million on non-development head and Rs 1474 million on the development schemes. Wsas’s fiscal deficit during the last financial year was Rs 1.11 billion, which is expected to rise up to 3.38 billion during the new fiscal year. However, this amount could be considered as social service cost of LDA. It will also spend Rs 150 million for the installation of water treatment plant in the city under the new development programme – Brecorder