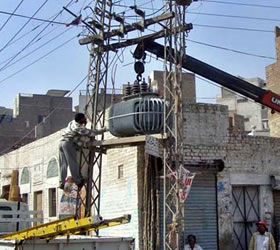 KARACHI (October 05 2010): Business community of the country has urged the government to take notice of the depressing situation arising from increasing mark-up rates and electricity tariff and save the industry from further cave in. They urged the government to refrain from announcing any further anti-business policies, particularly at the present critical point in time.

Criticising government’s decision of two percent increase in electricity tariff and increase in mark-up rate, they termed it harmful for both the trade and industry and urged the government to withdraw them immediately.

They said upcoming year would be the post-flood era and requires intelligent strategy for surmounting increasing economic challenges and any increase in utility tariffs, mark-up rates, imposition of new taxes would be a disaster for the industry and trade.Expressing his views, President, Pakistan Businessmen and Intellectuals Forum (PBIF) Mian Zahid Husain said tariff increase has turned out to be another blow to the industry and if the decision is not taken back, hundreds of industrial units would be closed down.

Chairman, Pakistan Tanners Association (PTA), Aziz Ahmed, while condemning the increase in power tariff, said export oriented industries are already suffering badly due to unbearable costs of inputs and utilities and now, government has given another blow to the nation by increasing power tariff. He demanded of the government to withdraw the decision for the sake of exports and falling industry, resulting in ever-increasing unemployment.

Chairman, SITE Association of Industry (SAI), Abdul Wahab Lakhani has out rightly rejected two per cent increase in KESC tariff from first October as announced by Nepra on the ground that it is detrimental for the industries. He said industries’ survival is already at stake due to continuous increase in power tariff by the government on one pretext or the other. He pointed out that the government increased power tariff by 50 percent in last two and a half years and some 26 percent during the last one year.

Taking a strong exception to the new tariff of KESC applicable from October 1, 2009, Lakhani said industries are already suffering and now, with this increase in tariff, industries have closed to getting shutdown. He said that the businesses are declining due to inflationary pressure ‘but the government is following IMF and World Bank dictation blindly’. The new tariff rates by Nepra, he noted, have come at a time when all economic indicators of the country are in the negative. The industries are struggling for survival, the exporters are trying to make the ends meet to face new challenges and competitions through cost-cutting measures.

In the backdrop of such a scenario, he stressed, Nepra should have insisted that KESC must improve its efficiency and cut down its distribution and line losses. Such strong corrective measures can only offset the subsidy that the federal government has withdrawn. Continuous increase in tariff will only promote dissatisfaction, he asserted.

Lakhani further said Site is the biggest industrial consumer of KESC with near about 10,000 electricity connections and is the real source of generating revenue for KESC, but if continuous load shedding is taking place how the utility can increase revenue.

He also stressed that Site area consists of mostly export oriented industries and exporters materialised their orders in advance and under the circumstances increase in utility tariffs abruptly converts a profit making industries in a loss.

He appealed to all the governmental authorities to intervene in the matter and save the industrial sector from collapse which will increase unemployment. Also, President, Karachi Chamber of Commerce and Industry (KCCI), Muhammad Saeed Shafiq, Talat Mahmood, Senior Vice President and Junaid Esmail Makda, Vice President KCCI in a joint statement vehemently rejected the decision of Ministry of Water and Power to increased electricity tariff by two percent for all types of consumers across the country as the government decides to dissolve Pepco.

The statement said if Pepco was going through turbulent times, there seems no justification in passing the losses to consumers. And as Raja Pervaiz Ashraf, Minister of Water and Power purviews the raise of two percent as little, why government decided to share load with masses in the first place, they asked.

The statement further said the government’s plan towards improvement in the structure of power sector is hailed but there is no assurance that it would resolve the prevailing energy crisis. The recently disclosed structure seems very complicated and it should be clarified. Moreover business and industrial community should be consulted before chalking out any change.

They said that the country is passing through a very crucial time and the entire nation is suffering due to the skyrocketing prices of food and utilities whereas job opportunities and sources of income have squeezed massively, and more and more burdens of taxes and price hikes may result to a total collapse of the system.

Muneer said that government should realise the crisis like situation and refrain from increasing tariffs. He demanded to reverse the decision as the industry is closing down day by day due to unbearable overheads. He said that business community has agreed to the government for levy of only time tax on big houses for the cause of rehabilitation of the flood affectees and the government high ups had assured the trade representatives for not imposing any tax or tariff increases but it seems that government is not in a mood to fulfil its commitment – Brecorder