Bar and bench in tense row 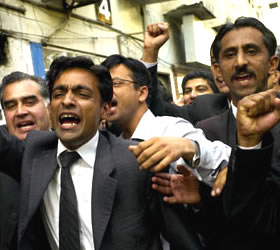 LAHORE – Judicial crisis in Punjab turned graver yet on Monday, when more judges and judicial officers jumped into counter-protest against the lawyers.A large number of civil and additional judges tendered resignation as a counter-protest against the lawyers who were taking out rallies to protest against police torture upon lawyers and pressing for the transfer of District and Sessions Judge Lahore Zawar Ahmad Sheikh.The judicial officers also expressed solidarity with Zawar Sheikh and complained against the insulting attitude of the lawyers. A day earlier too, around 100 civil judges had resigned, vowing not to return to courts until their prestige was restored to them. They alleged that some top lawyers wanted their favourites to fill in certain posts in judiciary and for that very reason they did not want an honest man like Zawar Sheikh in the District and Sessions seatLater reports tell that around 1,300 judicial officers, mostly civil judges, in other parts of the province also tendered their resignations to the respective D&SJs for expressing solidarity with Justice Zawar Sh but Lahore High Court Chief Justice Khawaja Muhammad Sharif rejected resignations of the judicial officers asking them to continue performing their duties in the interest of the poor litigants and others.
He also advised the judicial officers to serve the masses without any greed and fear.
Meanwhile the lawyers throughout Punjab completely observed black day on the call of the Pakistan Bar Concioul. In Khyber PK and Balochistan too, lawyers went on boycott of the courts, while in Punjab not only boycott was observed, but rallies were also taken out and protest meeting held. In Multan, a clash took place between the lawyers and the police when the former broke open main gate of the court premises and came out to protest against violence on their community in Lahore.They pelted stones at the police and set the effigies of IG Punjab and Secretary Home on fire. At some places of Sargodha, Gujranwala, judges sat in courtrooms without hearing cases for some time, but late reports said, these judicial officers have also tendered their resignations. In Faisalabad, lawyers took out a rally from District Courts up to Clock Tower Square – Nation