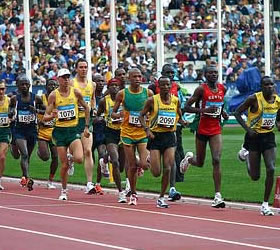 Englishman Astley Cooper was responsible for the Games concept as it was he who proposed of a sporting contest amongst the countries of the British Commonwealth way back in 1891. Writing for a magazine, Cooper suggested a festival combining sporting, military and literary events that would draw closer the ties and increase the goodwill and understanding of the British Empire.

The first recorded Games between Empire athletes consisted of track and field athletics, boxing, wrestling and swimming events. Canada, the winning country, was presented with a trophy in the form of a silver cup, 2ft 6in high and weighing 340oz. The event coincided with the celebrations in connection with the Coronation of His Majesty King George the Fifth in 1911, and was known as the ‘Festival of Empire’.The splendid feeling of friendliness between the Empire athletes at Amsterdam Olympics in 1928 re-vitalized the idea for the revival of Empire meetings, since no further development had taken place since the ‘Festival of Empire’.

The result was that 400 athletes from 11 countries took part in 6 sports and 59 events in the first edition of the Games that were known as British Empire Games and were held in Hamilton, Canada in 1930. The City of Hamilton provided $30,000 to help cover travelling costs of the participating nations in the inaugural event that had been talked about amongst Commonwealth nations for over thirty years.

Except for 1942 and 1946 due to the second World War, the Games have been conducted every four years though the event has seen many changes, including its name.

The 2002 Games in Manchester also saw for the first time, at any multi-sport event in the world, a limited number of full medal events for elite athletes with a disability (EAD) in a fully inclusive sports programme. This continued in Melbourne where EAD athletes took part in athletics, swimming, table tennis and power lifting – Timesofindia