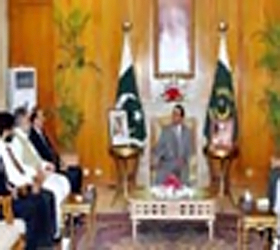 ISLAMABAD, Sep 22 (APP): A delegation of provincial ministers called on President Asif Ali Zardari and discussed matters regarding status of relief and rehabilitation activities in flood affected areas, political situation in Punjab, results of the recently held by-elections in Punjab and party affairs.The provincial ministers who attended the meeting here on Wednesday at the Aiwan-e-Sadr were led by PPP Punjab Senior Minister Raja Riaz. The Ministers included Tanvir Ashraf Kaira, Finance Minister, Muhammad Ashraf Sohna, Haji Muhammad Ishaq, Dr Tanvir ul Islam and Yousaf Ghurki. Ms Mehreen Anwar Raja, MOS for Law & Justice, Ms Rukhsana Bangash, MNA, Ms Fouzia Habib, MNA and Spokesperson to the President Farhatullah Babar were also present during the meeting.
Senior Minister Punjab Raja Riaz briefed the President about the relief and rehabilitation activities in flood-hit areas and the political situation in Punjab.
The President while mentioning the success of the party in Bahawalpur, Gujranwala, Sargodha and other constituencies in by-elections appreciated the political work done by the party. The President during the meeting directed provincial ministers, parliamentarians and party workers in Punjab to play active role and remain side by side with the flood victims by personally visiting relief camps set up for flood victims in their areas.
The President asked the ministers to involve the party and political workers in the relief operations. This was necessary as the task was too big for the government alone to handle and every section of the society needed to be mobilised, he said. The President also asked party workers to remain actively engaged in relief and rehabilitation work for their brethren in the hours of distress.
The President said that the close monitoring of the rehabilitation activities by the public representatives is vital as through this mechanism the government could better judge the situation on ground in different areas of the country.
The President said that directives have been issued and a fool proof system of transparency and accountability had been devised by the government for the collection and distribution of relief goods.
He said that all donations and relief goods and their disbursement to the provinces and the flood areas will be available on web and everyone can access the information.
He said that transparency was the key to combating corruption and a decision had been taken to make the distribution of relief and rehabilitation most transparent, the President said.
The President said that the government is exploiting all available resources to rehabilitate the flood victims to their original dwellings and assured that they will have better homes with modern design and technology.
Raja Riaz also apprised the President about the initiatives taken by the provincial government and the party for the relief and rehabilitation of flood victims in Punjab – APP