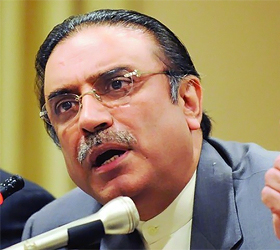 ISLAMABAD, Sep 22 (APP): A high level meeting was held in the Presidency to review the progress on the implementation of various ongoing projects undertaken in different parts of the country in various sectors with assistance of China.The meeting presided over by President Asif Ali Zardari was also attended by Nazar Mohammad Gondal, Minister for Agriculture, Nadeem-ul-Haq, Deputy Chairman Planning Commission, Khalil Ahmad, ambassador at large, Salim H Mandviwala, Chairman BOI, M. Salman Faruqui, Secretary General to the President, Salman Bashir, Secretary Foreign Affairs and secretaries of related government ministries and heads of departments.
Briefing the journalists about meeting, Spokesperson to the President Farhatullah Babar said that during President Zardari’s visit to China in July this year, Pakistan and China had agreed to strengthen the strategic relationship, increase the level of economic cooperation and take concrete measures to further bring their people closer together.
Pakistan and China have signed over sixty MOUs during the last two years in a various areas including agriculture, power, roads and highways, health , telecom, railways, education, hybrid seeds technology and sprinkler irrigation. The spokesperson said that the meeting was informed that bilateral trade between china and Pakistan has been enhanced from $ 2 billion in 2002 to around $ 7 billion.
There are about 120 Chinese enterprises working in Pakistan and that under the ‘Five Year Program’ for trade and economic cooperation 62 projects have been identified, the meeting was informed. The spokesperson said that the President asked the government to expedite work on the joint collaboration projects.
The President also advised the government to consider involving Chinese expertise and companies in flood control plans with emphasis on diverting flood waters away from populated areas – APP