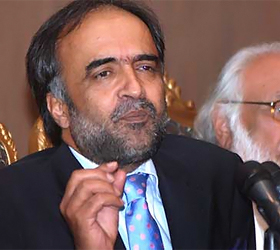 ISLAMABAD, Sept 22 (APP): Federal Minister for Information and Broadcasting Qamar Zaman Kaira said on Wednesday that the nation would resist any unconstitutional move to undermine democracy in the country  for democracy has been restored after a long and tough struggle against dictatorship undertaken by all segments of the society.Briefing the media about decisions of cabinet meeting chaired by Prime Minister Syed Yusuf Raza Gilani alongwith Minister for Education Sardar Aseff Ahmed Ali, the minister said the party enjoying majority in the National Assembly has the right to govern and it is acceptable to all political parties.
“We have to resist ,if any person or institution tries to topple government through unconstitutional and non-parliamentary way,” the  minister said adding that the nation has rendered great sacrifices for restoration of democracy.
Kaira said that the cabinet reiterated that rehabilitation of over 20 million flood-affected countrymen would remain top priority of the government and all national resources would be utilized to serve the purpose.
The cabinet acknowledged that the media had played very positive and vital role during past two-and-a-half years and it reiterated that independence of media would be ensured at all cost.
The minister said that out of 51 committees formed by the cabinet,32 have completed their reports while remaining 19 committees have been asked to complete their reports at the earliest.
Kaira said that during the cabinet meeting all ministers were asked to take steps for improvement in working of their respective ministries and attached departments.
He said that about the Higher Education Commission (HEC) the Prime Minister had already advised the Finance Ministry to ensure timely payment of dues of students studying abroad so that their educational year is saved.
Kaira said that some of the universities had given 50 per cent raise to their staff salaries while some other universities found it difficult to arrange the finances.He said a committee had been formed under the chairmanship of Finance Minister which would recommend issuance of federal government grants for
those universities which cannot afford to pay 50 per cent raise in academic staff salaries.
The Minister for Information said that the cabinet has decided that funds would be released for those HEC under construction projects which have been completed upto 90 per cent as the resources have been diverted  for early rehabilitation of flood victims.
Kaira told the mediamen that the Ministry of Food and Agriculture had briefed that  101,71,774 metric tons of wheat stock was available in the country and after meeting our needs 20,14,923 metric tonnes of wheat stock would be used as carry over stock for next year.
The minister said that it is a fact that our food basket has been affectedby recent floods but the government would ensure that wheat sowing in flood-hit areas in done in time and farmers having less that 25 acre holding would be given free of cost seeds and fertilizers so that sowing of the wheat crop is not affected.
Similarly, he said that the cabinet was informed that not only there is enough stock of rice and pulses available in the country to meet our needs but their stock would also be available for next year.
About the flood situation he said that so far 1,802 persons have died and 2,994 injured.Kaira said that according to available figures 1910,439 houses have
been damaged in the floods while 291,191 tents and 383,272 Tarpals have  been distributed among the IDPs so far.Kaira said that presently 76 helicopters and 1238 boats are taking part in rescue and relief operation.
Replying the questions of the media persons,the minister said that the federal government had no price control mechanism and provincial governments were taking steps for controlling prices of daily use items.
The minister urged the media to play its role in  exposing the hoarders responsible for artificial price hike of daily use commodities in the country.He said that it was unfortunate that some hoarders during the Holy month of Ramzan create shortage of daily items and increase their prices.
To a query he said that Federal government has freezed its non-developmental expenditures and after the 18th Amendment,several departments are being shifted to provinces.
Responding to a question,he said that health and education remain on the priority of the government but due to post-flood situation,the government  has to divert its resources towards rehabilitation of the flood-affected people.
About the petrol shortage,he said that the problem has been resolved now and shortage was reported only a few cities. The minister said that Pakistan has asked United States for handing over of Dr Afia Siddiqui and the matter has been discussed in the Parliament.
He said that since coming to power in 2008 the PPP-led government has tried to revive the agricultural sector which can play a key role in provision of jobs to unemployed youth.
To a question about introduction of flood tax,he said that first of all it was the responsibility of Pakistani nation to come forward for the rehabilitation of the flood-affected brothers and sisters.However,he said that so far no decision has been made on imposition of the flood tax.
To a question he said that some politicians and media houses had not come out of the hang over of the dictators and they give deadlines for fall of the present government,but with the grace of Allah and support of the masses, the government was serving the people of Pakistan and would continue to do so – APP