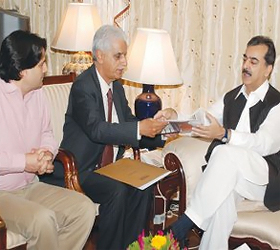 ISLAMABAD, Sept 22 (APP): Prime Minister Syed Yusuf Raza Gilani on Wednesday said any headway on the Kalabagh Dam project can be achieved only after the provinces reach a consensus on the issue.“The provinces adopted very positive approach in the case of the 7th NFC Award and reached a consensus without the federation. They can sit together and evolve a consensus (on Kalabagh Dam), if they so want”, Gilani told Waqt television here on Wednesday after receiving a copy of the referendum conducted by daily Nawa-e-Waqt regarding Kalabagh Dam as well as a letter written to him by Majeed Nizami, Editor-in-Chief of Nawai Waqt Group of Newspapers.

The Prime Minister appreciating the efforts of Majeed Nizami said, “It was time to exhibit unity and solidarity as the country was facing various challenges, which required “greater unity”.
Gilani said the appropriate forum to discuss such issues was the Council of Common Interests (CCI), where all the four provinces can evolve consensus and make headway, adding, however, “other than this, if some people talk about such matters, they are playing to the galleries and they do not mean it.”
The Prime Minister said in principle he has no disagreement (on Kalabagh Dam), but the timing and consensus is important, adding, “we should respect the mandate of provinces.”
To a question as if difference of opinion arises among the provinces in the CCI, the Prime Minister said, “then the matter would go to the joint sitting of Parliament”. About rumours of change on political front, Gilani remarked, “Wishes cannot be restrained” – APP
Twitter Facebook Google + Linkedin Comments