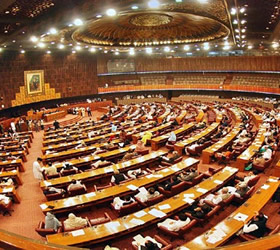 Number of members National Assembly on Tuesday expressed dissatisfaction on ongoing relief activities in flood affected areas and demanded serious consideration by the government. The members hailing from all three provinces including Sindh, Punjab and Khyber PakhtoonKhwa pointed to number of irregularities in the registration process and dispensation of the relief amount.

Speaking on points of order MNAs Engineer Amir Muqam, Rasheed Akbar Niwani, Jamshed Dasti, Bushra Gohar, Nawab Yusuf Talpur, Khawaja Sheraz, Aftab Ahmed Khan Sherpao, Nawab Yousaf Talpur, Maulana Ata-ur-Rehman and Abdul Ghani Talpur pointed out various loopholes in distribution mechanism and demanded prompt action to ensure transparency.
Amir Muqam mentioned that in number of areas no assistance was being provided and even electricity could not be restored. “the government functionaries go to affected areas for photo session and nothing practical is being done.”
He appreciated the commitment of the Prime Minister but stated, his team was not delivering properly. “Nobody is conspiring against the government. These are ineffective relief measures that bring bad name for them.”
He said Rs 20,000 announced for flood affected people by the Prime Minister were also not reaching people and claimed 90 per cent in various areas of KPK were still waiting the assistance.
Rasheed Akbar Niwani blamed NADRA of faulty registration mechanism and said, 4000 people in his district Layyah lodged protest against non-availability of compensation.
“NADRA has registered those who have not been affected by the flood,” he said and demanded that a list of affected areas should be sought from the district administration and distribute money among the deserving.
Jamshed Dasti complained of ignoring MNAs by the provincial authorities and said, the provincial government is distributing Watan Cards through Patwaris.
He demanded to bring this practice to an end and persuade the provincial government to also accommodate the MNAs as faulty mechanism had forced the affectees to protests.
Sardar Bahadur Ahmed Khan Sehar proposed special teams for registration of the affected people so the deserving people can get their right.
Ghaus Bakhsh Mehar said the government had failed to release water from the agricultural land that would affect the farmers as well as agricultural produce.
He also demanded transparent distribution mechanism of relief funds and mentioned to hundreds of thousands affectees, still waiting compensation.
Nawab Yousaf Talpur said, the BISP is focussing certain areas neglecting the remaining while the Sindh government is yet to receive funds from the federal government.
“People are not getting food and medicines. They are provided rotten food and when they protest, they are baton charged,” he said.
He proposed to write off loans of people from affected areas and urged the Prime Minister to convene Parliamentary Party meeting to have update from the members.
Minister for Tourism Maulana Ata-ur-Rehman mentioned that PDMA in KPK has de-listed D I Khan and Tank from flood-affected areas depriving the districts from grants for reconstruction.
He said people of Bannu were getting aid despite the fact it was far less affected from flood than these two areas and demanded their inclusion in flood affected areas list.
Marvi Memon said the breach in Tori dyke has not yet been probed despite an assurance by the President on August 14 as besides natural calamity, man-made disasters have also led to loss of lives and properties worth billions of rupees.
She complained about the discrimination in distribution of Watan Card among the flood victims.
Aftab Ahmed Khan Sherpao sought immediate disbursement of Rs 20,000 grant among the flood-victims of KPk as reconstruction of houses would be difficult in winter.
He said Swat, Chitral, Dir and Kohistan have been disconnected from rest of province and if communication system is not restored, food scarcity would hit the area and may claim human lives.
Nawab Abdul Ghani Talpur said, flood devastation has been worsened due to untimely decisions and unnecessary delay in breach in Manchar Lake that affected 200,000 people of Dadu and Jamshoro.
He said relief aid being distributed in his district is meager and besides flood victims from Pukka area, those from Kutcha area should also be provided loans and other facilities.
Khawaja Sheraz said Punjab government is notifying the safe areas as flood-hit, ignoring those really hit by the disaster and sought an inquiry into the matter.
In response to these points, Minister for Labor Syed Khursheed Ahmed Shah informed the House that revenue department conduct the survey of affected areas and the list is provided to NADRA on whose basis people are included in affectees list.
“If the provincial government will not declare any area as flood affected, it will not be enrolled in the computer. Declaring any area as flood affected is not the job of the federal government and NADRA, but of provincial government,” he clarified.
“Provincial governments notify the areas that are registered on computer and on basis of CNIC, the people are given compensation.  It is transparent mechanism,” he said.
Advisor to the Prime Minister, Nawabzada Ghazanfar Gul asked the members to point out irregularities and assured action.
The Prime Minister has constituted a committee and anybody having complaints can contact it, he said. “Where ever there will be a problem, we shall sort it out.” -app