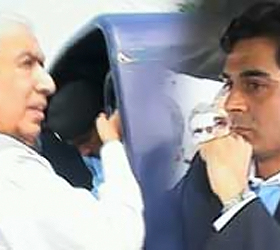 Police arrested ex-MD of OGDCL Adnan Khawaja along with former head of Intelligence Bureau (IB) Brig (r) Imtiaz from the courtroom on special directive of a three-member bench of Supreme Court on Tuesday. During the hearing of a suo moto notice, the CJ asked how come a convicted Adnan Kahawaja got appointed in the abovesaid organization? The apex court also ordered seizure of the properties of both the men and rejected Adnan’s bail plea. The court ordered Adnan Khwaja to submit bond challans in the SC while Brig Imtiaz has been asked to submit the money in Lahore High Court within three days.Both the men have been shifted to Adiala Jail.
It is mention worthy that in the wake of the suo motu notice taken by the apex court and the subsequent revelations in the media, the government annulled the appointment of Adnan Khawaja as OGDCL Chairman, only a day after he assumed the charge.

The chief justice said if Mr Khawaja had not completed his sentence, he would again go to jail. Adnan informed the court that he was on bail and his appeal in NRO case was pending before the court. He said he had served as Chairman NAVTEC and worked without pay. Later, a three-member Supreme Court bench issued notices to Adnan A Khawaja asking him to explain why he assumed two posts – Managing Director Oil and Gas Development Company Limited (OGDCL) and Chairman NAVTEC – despite the fact that he, as NAB convict, was disqualified to assume such a post. The bench comprising Chief Justice Iftikhar Muhammad Chaudhry, Justice Tariq Parvez and Justice Ghulam Rabbani was hearing a suo moto notice on the reported appointment of Adnan Khawaja as Chairman OGDCL by the government. The court issued notices to NAB to explain whether Adnan’s appeal had been finally decided by the Islamabad High Court or not. The notices were also issued to the persons who had given sureties in Adnan’s cases, while the Attorney General Maulvi Anwarul Haq was asked to provide the details of payment made to Adnan as Chairman of National Vocational & Technical Education Commission (NAVTEC). Brig (R) Imtiaz Ahmed, former DG ISI, who is also involved in NAB cases was directed to appear in the next hearing. The court directed the Secretary Establishment Division to inform the court on the next hearing, September 21, as why Adnan was appointed on two posts – MD OGDCL and Chairman NAVTEC.
Adnan was convicted in that case with two-year rigorous imprisonment and a fine of Rs two lakh. He was also disqualified for a period of ten years from seeking or being elected, chosen, appointed or nominated as member of any public office, any statuary or local authority of government of Pakistan or granted any financial facilities in the form of any loan by any government bank – Dunyanews