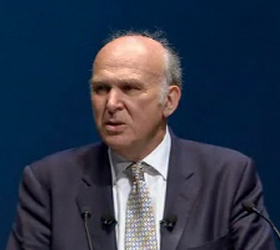 Vince Cable has promised to “shine a harsh light” on the behaviour of Britain’s big businesses and banks.

In a speech to the Lib Dem conference, the Business Secretary said: “Let me be quite clear.

“The Government’s agenda, is not one of laissez-faire. Markets are often irrational or rigged.

“So I am shining a harsh light into the murky world of corporate behaviour.”

He added: “Capitalism takes no prisoners and kills competition where it can.”

Mr Cable’s language has sparked speculation of a rift within the government, but he told Sky News “there are no cracks in the coalition, we work as a team”.

He said he had no problem with entrepreneurs who create jobs being paid large sums of money, but highlighted the need for extensive banking reform.

Mr Cable told delegates he had no regrets about what he has said in the past about the banks.

“I make no apology for attacking spivs and gamblers who did more harm to the British economy than Bob Crow could achieve in his wildest Trotskyite fantasies, while paying themselves outrageous bonuses underwritten by the taxpayer.”

“Some of the banks are too big to fail,” he told Sky News. “The government has to prevent the taxpayer being put in this exposed position.”

During his speech Mr Cable attacked Labour for denying its role in creating Britain’s massive public deficit, accusing them of lacking foresight.

“There was, of course, a global financial crisis. But our Labour predecessors left Britain exceptionally vulnerable and damaged,” he said.

“They built a house on sand and thought that they were ushering in a new, progressive work of architecture.

“It has collapsed. They lacked foresight; now they even lack hindsight.”

The Opposition offered no alternative to the coalition’s programme of spending cuts, he said. Their only “tough choice” was which Miliband brother they want as leader.

However, one part of the Business Secretary’s speech is likely to provoke disquiet among the Lib Dems’ coalition partners.

Mr Cable said that the “only way” to fund higher education with less public money was for “graduate beneficiaries to make a bigger contribution from the extra earnings they enjoy later in life”.

Appearing to indicate that the Lib Dems favour a progressive graduate tax, he said: “I am doing everything I can to ensure that graduate contributions are linked to earnings.

“Why should low paid graduates – nurses, youth workers or science researchers – pay the same as corporate lawyers and investment bankers?”

The Coalition agreement states that the Government will await the results of Lord Browne’s review of higher education funding and student finance, though Tory ministers are believed to have rejected a progressive graduate tax on the grounds that it would be unfair for high-earning graduates to pay back more than the cost of their degree.

Sky’s political editor Adam Boulton said: “Mr Cable went out of his way to make it clear that he is pro-business, pro-competition.

“It is the anti-competitive side of capitalism, he complained about.

“He felt that bankers had behaved irresponsibly.

“He did champion progressive taxation, but made it clear that when it comes to cutting the deficit, he is a hawk.” – Skynews

The ‘Truth’ Behind The Sinking Of Titanic