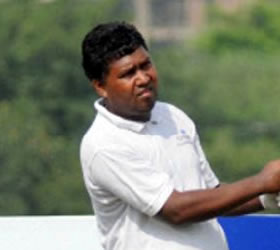 GURGAON: Caddie-turned-pro Ashok Kumar lifted the DLF Masters title trophy riding on his overnight eight-stroke lead after rain washed out the final day of the PGTI event on Sunday.

Ashok had carded a brilliant seven-under 65 for the second consecutive day to take a massive eight-stroke lead over compatriot Gaganjeet Bhullar after the penultimate round on Saturday.

It would have taken nothing less than a miracle to upstage Ashok and with rain gods disrupting the proceedings, the final round was called off at the DLF golf and country club.

Defending champion Bhullar, who had carded one-over 73 on Saturday to slip down after sharing the top spot with Ashok after the second round, finished runners-up.

Two-time winner Jyoti Randhawa, who was leading after round one, and Himmat Singh Rai dropped down the leader-board after carding rounds of 73 and 74 in the third round to finish tied sixth along with four others.

“This is my biggest win in terms of prize money. I have regained my lost touch and it is time to look ahead and secure more wins,” Ashok said. – Timesofindia