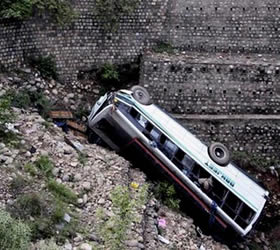 A school bus carrying up to 35 children plunged into a river in Pakistani Kashmir on Tuesday, killing at least 15 pupils, an official said.

â€śWe have recovered the bodies of 15 children,â€ť said Chaudhry Imtiaz, deputy commissioner for Muzaffarabad, the capital of Pakistani-administered Kashmir.

The minibus was carrying 30 to 35 children aged 10 to 15 from Garhi Dupatta, 28 kilometres from Muzaffarabad to Allama Iqbal School, he said.

The driver lost control of the vehicle, which skidded off the road and plunged into Jhelum river, said Ghulam Akbar, police chief of Muzaffarabad.

â€śOnly five children have been recovered alive,â€ť he said, leading to fears that the death toll was likely to rise.

Pakistan has one of the world’s worst records for fatal traffic accidents, blamed on poor roads, badly maintained vehicles and reckless driving. -Dawn