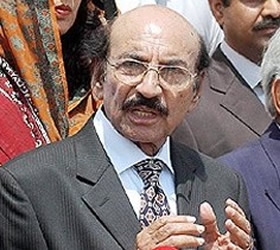 The federal government is showing reluctance to ensure provision of Rs 277 billion for federally funded Public Sector Development Program 2010-11, citing financial crunch as major reason, it is learnt. The Ministry of Finance (MoF) has withheld the funds after consensus was reached on the 7th National Finance Commission Award and the signing of the 18th Constitutional Amendment, empowering the provinces, particularly in financial matters.

Sources said that Sindh government officials had seriously taken up the matter at the meeting of the Economic Co-ordination Committee (ECC) of the Cabinet where the request regarding release of funds was turned down, citing financial crisis as major reason behind it.

Hundreds of important development schemes, to be funded by the federal government would badly suffer if the funds are not released on time, they said, adding that billions of rupees earlier spent on these schemes would also cause a great loss to the national exchequer. The finance department of Sindh had recently forwarded a letter to the MoF containing current status of these schemes and mode of financing, requesting it to provide funds as the provincial government could not arrange billions of rupees for these schemes.

The chief minister had also taken this matter with President during the latter’s recent visit who had assured that the matter would be resolved and the federal government would ensure provision of funds for these schemes so as to complete the schemes within the stipulated time, they said.

Advisor to Chief Minister for Planning and Development Dr Kaiser Bangali confirmed this while talking to Business Recorder. He said that the issue of financing Rs 277 PSDP schemes in Sindh province remained unresolved as the federal authorities were reluctant to provide the funds. The finance department was in touch with the MoF requesting it to ensure early release of funds so that the underway schemes could be complete timely, the advisor added. -brecorder