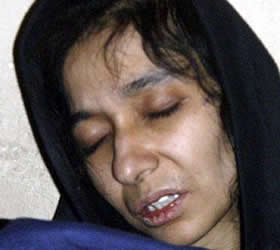 Pasban staged a protest rally in support of Dr Aafia in front of the press club on Sunday.
Led by Pasban Peshawar chief Jehangir Khan, the protesters chanted slogans against the baseless trial of Dr Aafia Siddiqui before a US court. They also came hard on the country’s rulers for their silence on the issue, advising the government to rethink country’s foreign policy instead of fighting America’s war.The protesters condemned the prolonged detention of Dr Aafia Siddiqui and the inhuman treatment being meted out to her by the superpower and called for her immediate release.
The demonstrators raised slogans against all those siding with the US at this critical juncture.
The termed the US an international terrorist and champion of human indignity. The whole world, they said, was facing terrorism only because of the US. They said the US had been detaining a helpless Pakistani lady who was a Hafiza of the Holy Quran for the last six years. She was subjected to most inhuman treatment and torture in the most brutal ways but the Pakistani rulers did not have the courage even to demand her release.
The emotionally charged participants of the rally chanted anti-US slogans and demanded the government to sever all diplomatic ties with the United States and send the US ambassador.
“Her only crime was that she was a Muslim and a Pakistani… Why are all human rights organisations across Pakistan and the world silent over such a massive issue of human rights violation? What law on earth allows the arrest of an innocent woman and her children without any charges?” they questioned.
The Pasban activists strongly criticised the so-called Pak-US friendship, saying the “Americans were the enemy of Pakistan. No friend ever kidnapped daughters of their friends or attacked them with drones”. She said Pakistanis were a peaceful nation and not a nation of terrorists. “We will raise our voice till Dr Aafia and all other missing girls are recovered,” they pledged. -statesmen