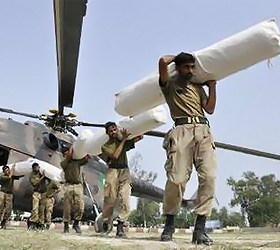 Pakistan Army has distributed over 16,000 tons of dry rations and 23,000 tents from its quota among the flood affected people. Army is providing dry rations, cooked food and medical treatment to stranded people at relief camps in Sindh.