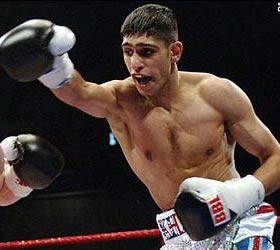 LONDON, (APP)-Amir Khan, the British boxer of Pakistani origin, who helped raised over one million pounds for the flood relief victims in Pakistan said the tragedy struck him harder than any opponent ever has.  He told “The Independent” on Sunday  after his return from the South Asian country, birthplace of his parents, where, as an Oxfam ambassador, he gave hands-on assistance at the flood disaster area.  What he saw, he said, hit him harder than any opponent ever has. “You don’t realise the extent of the damage until you see it with your own eyes, thousands of people who have been left with nothing. We were at a place called Charsadda in the province of Khyber Pakhtunkhwa.

It was total devastation. You couldn’t help but be moved.  “It was heartbreaking, unimaginable. I was in Pakistan after the 2005 earthquake too, but this was something else. It’s put the country back years. I wanted to do whatever I could to help people rebuild their future.”
With his father, brother and uncle, Khan collected and distributed clean water, pitched tents and handed out money and food tokens.  “We went into the camps and I’ve never seen anything like it in my life. An area the size of England has been obliterated and people face no present and no future. This tragedy has cut me deeply. It makes you feel so inadequate. I intend to go back again after my next fight because these people need all the help they can get.” Khan, who has already helped raise over 1 million pounds for the flood relief victims, says he will dedicate his next fight ­ which looks set to be against the leading contender for his WBA belt, the big-punching Argentinean Marcos Maidana, in December ­ to the relief fund, to which he will be contributing part of his purse.

Khan’s 19-year-old brother Haroon stayed in Pakistan, for whom he will box at the upcoming Commonwealth Games in New Delhi despite having represented England and Amir said he made the right decision. – App