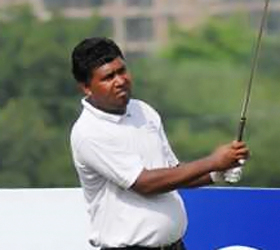 GURGAON: Caddie-turned-pro Ashok Kumar fired his best card of the year, a scintillating seven-under 65 to share the lead with defending champion Gaganjeet Bhullar, who turned in a sizzling five-under 67, after the second round of the DLF Masters golf tournament on Friday.

Overnight tied ninth, Kumar sank as many as nine birdies against a couple of bogeys to total nine-under 135 at the DLF Golf and Country Club.
Bhullar, overnight tied second, also knocked down five birdies and an eagle against two bogeys to aggregate nine-under 135 to top the leaderboard. Two-time champion, Jyoti Randhawa, had a rather sedate day as he carded a one-under 71 to lie fourth at sixth over 138.
Overnight tied second, Himmat Singh Rai and Gaurav Pratap Singh turned in an identical three-under to take the third spot at seven-under 137 and fifth spot respectively.PGTI Order of Merit leader Mukesh Kumar (69), Vinod Kumar (70) and Anirban Lahiri (69) were tied fifth.
Indian Open winner C Muniyappa (69) was tied 12th, along with Shamim Khan (71) and two others at one-under 143. Gaurav Ghei, who had horrendous rounds of 76 and 78, missed the cut, which was decided at five-over 149. On a bright and sunny day, Ashok had a rather wobbly start as he hit a bogey in the second but he soon went on a birdie spree as he picked up strokes at the fourth, sixth, seventh and ninth holes to make the turn at a creditable four-under.

The Delhi-born golfer then hit a 25ft putter birdie at the 11th hole before picking up a hat-trick from the 14th to the 16th holes. He ended the day with another birdie at the last hole to end the day on a high. “I hit the ball well, the irons played well. I got them fitted this morning and I hit well with them. I attacked the pins since morning and have been setting easy birdies. This round came at the right time for me,” Ashok said after the day’s proceedings. “I have been suffering from a wrist injury but now I have recovered quite well. I have been out for four months. After May I didn’t play and started playing again with the PGTI tournament in Chandigarh in August. I still feel pain, I take pain killers,” Kumar added. The 10th tee starter, Bhullar was one over by the time he reached the 12th hole but the Punjab golfer made amends with birdies at the 14th, 15th and 18th hole to make the turn at two-under. On resumption, he picked up more birdies at the sixth and seventh holes but icing on the cake was the eagle at the ninth hole which catapulted him to the top of the leaderboard.

“It was another satisfying day. Thank God it didn’t rain. It was hot and humid today. I have been hitting the ball well and had 16 greens in regulation. But I was a little inconsistent with my putting,” Bhullar said. “I had set some goals for me and after two days, I am already two strokes ahead of my goal but the leaderboard is packed with players like Himmat, Ashok and Jyoti, lets see if I can repeat my performance in the weekend,” he added. Asked what would be the ideal winning score, Bhullar said it depends on the weather.”It would be close to 15 but if it rains, it will come down to around 12,” he said – Timesofindia