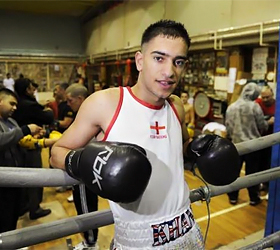 ISLAMABAD, Sep 16 (APP): Pakistan Boxing Federation (PBF) is pinning high hopes on Haroon Shahid, the younger brother of Britain’s light welterweight world champion, Amir Khan and other pugilists during the Common Wealth Games to be held in New Delhi India from next month. “We have great expectations from the young and talented boys that they will do well for uplifting country’s image in the Common Wealth Games,” Muhammad Akram Khan, PBF Secretary General told APP on Thursday. Akram said that inclusion of Haroon Shahid had also lifted morale of other boys and they were eagerly waiting for the event. “He (Haroon) is an excellent pugilist. He has been getting training at his brother’s academy – so his inclusion has brightened our chances to win medals,” he said The PBF had requested Amir and his parents a few months ago for including Haroon in the six-member national team for Common Wealth Games, which they happily accepted.

Haroon, 17 has several junior titles under his belt including the last year’s win of Amateur Boxing Association (ABA) bantam weight. In the UK he is famous as “Harry Khan”. He had joined the teammates last month in the camp organized by the PBF for Common Wealth Games at Sports Complex Islamabad.
Pakistan team for the event consists of Mohammad Waseem (49kg), Haroon Shahid (52kg), Qadir Khan (56kg), Adnan Hussain (60kg), Nisar Khan (75kg) and Mir Waiz Khan (91+kg). Cuba’s Francisco Hernandez Roldan will be the chief coach and Ali Bukhsh will be his deputy for the Games.  “Our other boxers have also a lot of experience and they have won accolades for the country. Competing in India would be another opportunity for them to do their best,” Akram added. He said that the Cuban coach had recommended the names of boxers after working with them for several months – APP