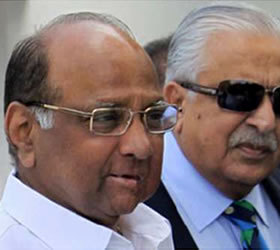 NEW DELHI: The ICC on Thursday made it clear that it would not tolerate corruption in cricket and warned of stern action against players found guilty in the spot-fixing scandal which has rocked world cricket.

ICC President Sharad Pawar also said that Scotland Yard’s investigations into the spot-fixing charges against Pakistani cricketers will not take long and there was “nothing to hide” on this issue.

“Till Scotland Yard probe is not over how can we comment on that? But if anything established we will take strong stand. Without information we should not jump into any conclusion,” Pawar told reporters after a meeting with PCB Chairman Ijaz Butt at his residence.
“Prima facie there are some allegations and we have suspended the players on the basis of that. Scotland Yard has permitted them to go back to Pakistan and PCB has also promised to make them available to the investigators if required. Nobody is playing hide and seek.

“A major investigation agency is carrying out the probe and that will not take long. PCB or ICC will not interfere in the process,” he added.

Pawar said that all the countries are supporting the ICC in preserving the sanctity of the game.

“PCB is not a separate entity, it is also a part of the ICC. ICC takes collective decision and we will not tolerate any nonsense or corruption. All the boards are supporting us in preserving the sanctity of the game,” Pawar said.

Butt claimed that the PCB was not offended with the ICC’s move to provisionally suspend the three cricketers – captain Salman Butt and pacer duo of Mohammad Aamer and Mohammad Asif.

“We are not offended for the decision. ICC asked them to individually answer and all of them have done so. If anyone is found guilty, we will not show any tolerance. ICC Code of Conduct is very clear regarding this matter,” he said.

“We have talked about the three players, the Scotland Yard is investigating the matter. Till investigation is complete, neither we are commenting nor the ICC is commenting,” Butt added. – Indiatimes

Scotland Yard may wind up spot-fixing probe next week

Scotland Yard may wind up spot-fixing probe next week