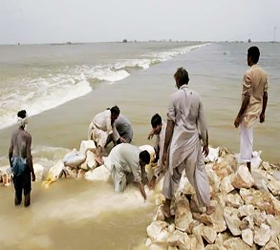 Water level in Manchar Lake, situated near Dadu, reached an alarmingly high level on Wednesday with more water pouring into the lake. The water has already inundated several residential buildings in Manchar city. Sindh’s provincial irrigation department and locals were using sacks of sand to block the flow of water as its level rose above the meter installed by the department, exceeding the lake’s capacity of 121 feet. The water level at Manchar Lake reached RL121.1 feet (exceeding its maximum capacity of RL121feet) and the water was overflowing from point RD98 to RD100 of its protective embankments. Warnings were therefore issued to evacuate Bhan Saeedabad city – Nation