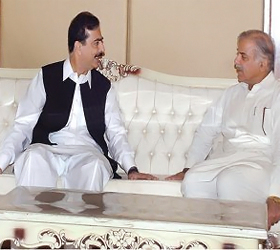 ISLAMABAD, Sep 15 (APP): Prime Minister Syed Yusuf Raza Gilani has directed to prepare a comprehensive national rehabilitation and reconstruction plan ensuring judicious distribution among the provinces and transparent disbursement of funds to the flood affected people.He said that the plan would be discussed in the Council of Common Interest to achieve national consensus.The Prime Minister while chairing a high level meeting to review flood situation in the country said that a uniform assessment policy would be worked out in consultation with the provinces for disbursement of the remaining amount of relief package. The Prime Minister said that the first phase of flood relief operation is close to completion and disbursement of relief assistance is in progress while second phase of rehabilitation will soon be launched in all the flood affected areas.

He directed all the concerned ministries and institutions to evolve a well coordinated plan ensuring transparency. He urged for concerted efforts to sensitize the international community and create better awareness about the plight of millions of flood victims as well as to mobilize support for the immediately required assistance for rehabilitation and reconstruction phase.
The Prime Minister said that the government was determined to use every possible resource at its disposal to help the affected families but given the volume and magnitude of catastrophe was constrained to seek international help to cope with the enormity of this challenge.
He appreciated the international community’s cooperation in rescue and relief efforts.
He expressed confidence that keeping in view the colossal losses at the hands of ravaging floods, the world community and financial organizations would consider provision of additional resources for rehabilitation and reconstruction.The Prime Minister said the government has taken a number of steps to raise its own resources to meet the needs of the floods affected population.  These measures, he added, include reprioritizing the budget, freezing expenditure on last year level, diverting some of the development funds, increasing tax base and austerity in all the government departments. The meeting was attended by Federal Minister for Foreign Affairs Makhdoom Shah Mahmood Qureshi, Minister for Finance Dr. Abdul Hafeez Shaikh, Minister of State for Finance and Economic Affairs Division Mrs. Hina Rabbani Khar, Deputy Chairman Planning Commission Nadeem-ul-Haq, Secretary Finance, Secretary Foreign Affairs, Secretary Economic Affairs Division, Secretary Planning, Principal Secretary to the Prime Minister, Chairman NDMA and other senior officials of the concerned ministries – APP
Twitter Facebook Google + Linkedin Comments