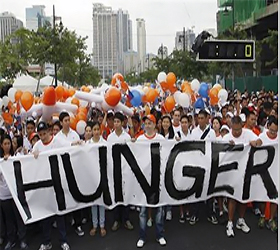 UNITED NATIONS, Sept 14 (APP):  Although the number of hungry people in the world has fallen below 1 billion thanks to renewed economic growth, it remains ‘unacceptably’ high, two UN agencies stressed on Tuesday.The UN Food and Agriculture Organization (FAO) announced in a new report that 925 million people will suffer chronic hunger, down nearly 100 million from 1.02 billion in 2009. But with a child dying every six seconds because of undernourishment-related problems, hunger remains the world’s largest tragedy and scandal, said FAO Director-General Jacques Diouf.He warned that the continued high level of global hunger hampers the achievement of the Millennium Development Goals (MDGs), the eight globally-agreed anti-poverty targets with a 2015 deadline. Additionally, recent increases in food prices, if they persist, could further impede efforts to curb the number of hungry people in the world.

“But this is no time to relax,” she emphasized. “We must keep hunger on the run to ensure stability and to protect lives and dignity.”
Next week, world leaders will gather at UN Headquarters in New York to assess progress made in achieving the MDGs. Goal 1 is to halve the proportion of the world’s hungry from 20 to 10 per cent, and with 5 years left till the 2015 deadline, that proportion still stands at 16 per cent.
At the World Food Summit in 1996, the quantitative target of halving the number of hungry people was set for the first time, from 800 million in 1990-92 to some 400 million by 2015. For this target to be met, the number of hungry will have to be cut by 500 million in the next five years.
According to FAO, the fact that historically the number of undernourished people continued to increase even in periods of high growth and relatively low prices indicates that hunger is a structural problem. Although essential, economic growth alone, the agency noted, is not sufficient to wipe out hunger in an acceptable time frame.
“Success stories do exist in Africa, in Asia and in Latin America,” Diouf said, calling for such experiences to be replicated and scaled up.
This year’s hunger figure marked a nearly10 per cent decline from the 2009 level, with the reduction concentrated in Asia, where 80 million fewer people are estimated to be going hungry this year. In sub-Saharan Africa, the drop was much lower at 12 million, with one out of every three people in the region still undernourished. Next month, FAO and WFP will release their joint flagship report, “The State of Food Insecurity in the World.”
Among its findings will be that two thirds of the world’s hungry live in just seven countries: Bangladesh, China, the Democratic Republic of the Congo (DRC), Ethiopia, India, Indonesia and Pakistan – APP
Twitter Facebook Google + Linkedin Comments