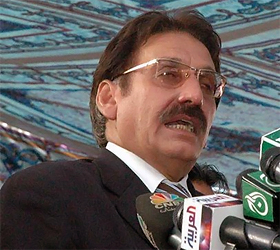 ISLAMABAD, Sept 14 (APP): Chief Justice of Pakistan Iftikhar Muhammad Chaudhry said on Tuesday that the  courts would continue fulfilling their responsibilities to declaring all un-constitutional steps as illegal. Addressing a ceremony held here in connection with start of New Judicial Year, the Chief Justice said that the judiciary fully respected democratic institutions and elected representatives.He added judges were not interfering in the state departments.He said that courts make any judgement according to the law.He said Pakistan is a democratic country having parliamentary form of government which guarantees the basic rights, rule of law and freedom of press.

Other speakers said that the ceremony provides an opportunity to set targets to attain the objectives and goals  and to overcome the obstacles and hurdles preventing the judiciary from achieving actual cause of dispensation of justice. Moreover, The Attorney General for Pakistan, representatives of Pakistan Bar Council and President, Supreme Court Bar Association also addressed the ceremony. Senior lawyers and law officers and representatives of bars attended the ceremony – APP