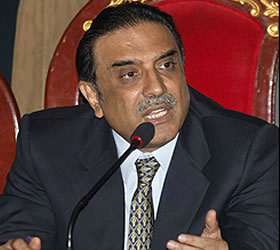 LONDON, (APP)- President Asif Ali Zardari has dismissed concerns that international aid to help 20 million people affected by massive flooding could be misused. He told “Financial Times” that his government was stepping up domestic efforts to raise money for flood relief.International donors have so far committed just over $300 million to a United Nations appeal for $460 million to provide emergency relief for victims of a disaster that put a fifth of Pakistan under water. President Zardari challenged his critics to prove “there had been even one scandal so far that involves the misappropriation of flood funds.”

The Pakistan government estimates that $43 billion will be needed for relief and reconstruction work. President Zardari told the paper that local officials in Islamabad and Karachi have agreed to levy a one-off tax on large urban properties in the federal capital and the southern Sind province to raise flood funds, estimating this could raise Rs 7 billion ($82 million).

“Unless we can begin coming up with the money ourselves, how can we expect foreign taxpayers to be generous?” he said. “It is not the amount which matters – it is also the intent.”
President Zardari has for the past two weeks been travelling across Sindh province, the worst hit region. He said he would urge provincial governments controlled by other parties to also impose a flood levy on property.

He said the government would introduce an identity card for flood victims to ensure aid reaches those in need. – App