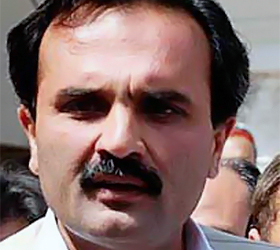 PESHAWAR: Chief Minister Amir Haider Khan Hoti has said that roads links between Kalam and Mingora city would be restored in three weeks and expressed his optimism of starting work on Darul Qaza in next month.

The developmental projects worth Rs17billion have been suspended with the aim to provide speedy relief to flood affected people and help them in rehabilitation process.

This he said while addressing a function organised to compensate the heirs of flood victims at Circuit House in Mingora.

Speaking on the occasion, Amir Haider Hoti said that Rs1 billion has been spent so far for the relief and rehabilitation of flood victims of Khyber Pakhtunkhwa while Rs420million has been released as compensation for heirs of the affectees.

However, he added that work on Madyan-Kanju Road and Guman Bridge would continue despite suspension of developmental projects.

The flood and torrential rains, he said, although has affected almost the whole country and KP but Swat was among the worst hit districts, adding that in KP alone the devastating floods claimed 1100 precious lives and rendered hundreds of thousands homeless.

Keeping in view the miseries of the flood affectees, the provincial government decided to increase the compensation amount to Rs3,00,000 from Rs100,000, Hoti said, adding that first installment of compensation amount Rs20,000 would be released in next couple of days.

He said his government was well aware of problems of flood affected people and they would not be left alone in this hour of trial.

The chief minister also vowed that his government would not leave any stone unturned for the rehabilitation of the affectees.

To a question, CM informed that Darul Quza would start functioning in Malakand division in October for which Rs123.6 million had been released, saying that army had played a key role in flushing out terrorists and militants from the Swat valley.

He further said that survey in DI Khan and Tank districts had been completed and compensation would be released to affectees in next three to four months.