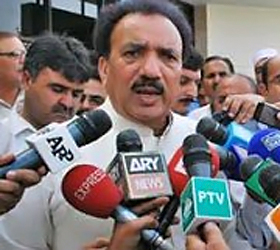 QUETTA, Sep 08 (APP): Federal Interior Minister Rehman Malik on Wednesday announced that the federal and provincial government had agreed to launch an intelligence guided law enforcement agencies action against extremist groups involved in suicide attacks and targeted killing of innocent people in Balochistan. Addressing a crowded news conference along with Home Minister Mir Zafrullah Zehri and IGP Balochistan Malik Muhammad Iqbal at CM Secretariat here, he said that in view of decision the Frontier Corps Balochistan have been granted speacial powers of search and raids for a period of three months.

He maintained that no action would be taken in Balochistan like that of military operation in Swat and Wazirstan, adding however, a special type action aimed at rooting up terrorism from Balochistan.
He announced to ban groups in Balochistan who use words liberation, army and lashkar in the names of their organizations.
He warned that strict action would be taken against them if found in anti-state activities.
He said that ban had been imposed on BRA, BLA, BLUF, BMDT and another extremist organization in the province.
He noted that FC would assist police in action against criminals involved in targeted killing and anti-peace activities as the Balochistan police had no capacity to counter terrorism alone.
He said the federal government had recorded its protest with the US, Afghan governments and Indian authorities on presence of training camps of miscreants in Afghanistan which were being used to deteriorate law and order in Balochistan.
He said the federal government would fully support FC and Balochistan police for action against criminals in respect of weapons, force and intelligence information.
He announced that 2,500 more posts had been created in FC and recruitment center would be set up in Loralai, Khuzdar and Turbat for the purpose.
He noted that after recruitment under  Aghaz-i-Haqooq-i-Balochistan Package, 5,500 federal government posts for Balochistan would also be filled.
He said that federal and provincial government had decided to come heavy on criminals and anti-state elements.
Earlier, he held meeting with Chief Minister Balochistan Nawab Muhammad Aslam Khan Raisani, Home Minister Mir Zafrullah Khan Zehri, Chief Secretary Mir Ahmed Bukhsh Lehri, Home Secretary Akbar Hussain Durrani, IGP Balochistan Malik Muhammad Iqbal and other senior government officials.
He informed them that on the special directives of President Asif Ali Zardari and Prime Minister Syed Yusuf Raza Gilani, he would himself visit Quetta after every 10 days to monitor the LEA action against criminals – APP
Twitter Facebook Google + Linkedin Comments