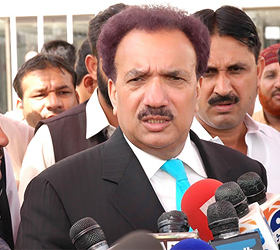 QUETTA: Sep 07 (APP) Issuing strict warning to the elements involved in bomb blasts and target killing in Balochistan, Federal Minister for Interior Rehman A Malik said that Lashkar-e-Jhangvi had become a monster and time was ripe to root out the menace.Talking to media person here at the Quetta International Airport, Malik said that he was visiting Balochistan on the specific directives of the President and Prime Minister.Expressing his profound sorrow over the loss of precious lives in Quetta suicide blast, the Interior Minister said that Tehreek Taliban Pakistan (TTP), Al-Qaeda and Lashkar-e-Jhangvi were following an anti-Pakistan and Anti Islam agenda. “They can’t be called human being or Muslims even they are worst than infidels”.

He added that the government was planning countermeasures especially Swat and Malakand like crackdown against those who are involved in targeted killing and bomb blasts in Balochistan.
He said  he would meet Chief Minister Balochistan Nawab Aslam Raisani, officials of intelligence agencies and some other political leaders to develop consensus in favor of taking action against anti social elements. “Balochistan is a very essential part of Pakistan, everybody owns this”, Mr. Malik said adding that consensus on NFC Award and Aghaz e Haqooq e Balochistan were the measures which clearly spoke of the federal government’s sincerity in resolving the issue of Balochistan.
He said that the government removed checkposts of the Frontier Corps on the demand of the people but it yielded no positive results and an increase in incidents of target killing and other crimes was observed. I have not come here to restore those checkposts, this time the government has changed its strategy and the action taken by the government would speak loudly.
To a question, the minister said that he had never talked about imposing restrictions on religious procession but had appealed to the scholars to change the procedure and restrict the procession either to walled-premises or shorten its traveling route. “It is our duty to provide security to people but the police can’t provide security to every individual especially when a procession is long and its traveling route is in kilometers.
He said that he would convene a meeting of the scholars after eid and would appeal to them to review the procedure and come up with a plan which could help secure the worshipers against any threat.
Provincial Home Minster Mir Zaffarullah Zehri, Home Secretary Akbar Durrani and other senior officials were also present on the occasion – APP