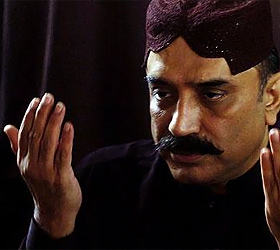 Asif Ali Zardari, Pakistan’s president, has warned that his country’s very survival was under threat from the twin forces of extremism and flooding, as militants launched their third major strike in less than a week.

A suicide bomber rammed a pickup truck laden with explosives into a police station in the north-west of the country killing 19 people. Among them were four children.

It brings the total of people who have been killed in a wave of terrorist attacks since Wednesday to 109 amid signs the Pakistan Taliban is trying to capitalise on the disarray caused by the floods.

President Zardari acknowledged the dire threat in a statement released to coincide with Defence of Pakistan Day.

“On September 6 this year the nation is confronted with an existential threat from fanatics, zealots and extremists on the one hand and from the material devastation caused by the history’s worst floods on the other,” he said.

“While the former is testing our will to survive and live in accordance with our values and ideology, the latter is testing our ability, resourcefulness and resilience to rise like a phoenix from the ashes of a natural disaster.”

“The TTP will leave no stone unturned to speed up attacks and defeat the enemies of Islam. The Pakistan government is committing a great sin by siding with the US against the Taliban, who are the true defenders of Islam”, he told The Daily Telegraph by telephone.

On Friday, a senior commander said the Pakistan Taliban was preparing to launch attacks on Europe and the US.

“It goes to show that the terrorists have no creed except bloodshed and chaos, and are desperately carrying out their agenda regardless of the precarious conditions,” he said.

The government insists that it has not let up in its campaign against al-Qaeda and the Taliban despite the country’s worst ever natural disaster.

However, more than 60,000 soldiers have been drafted into flood relief efforts and military helicopters are being used to ferry supplies to millions of people who need food, medicine and clean water.

At the same time, the government has been accused of bungling the emergency response, allowing charities linked to extremist groups to seize the initiative.

The potent mix of natural disaster, terror threat and political unrest have raised the spectre of a return to military rule, with some politicians calling openly for the generals to take a stronger hand in running the nation.

Rahimullah Yusufzai, an expert on the region’s extremist groups, said the floods had weakened the army’s ability to take on the Taliban.

“The militants will look for any opportunity to strike so there’s no question they have been using the floods as a chance to regroup and resupply. There was a lull but it’s over now.” On Friday, a suicide bomber killed 59 people at a Shiite Muslim rally in Quetta, capital of the southwest province of Balochistan.