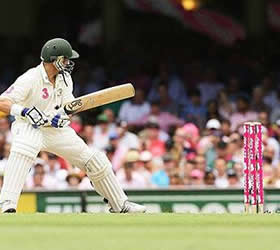 The Pakistan team are under renewed scrutiny for their performance in a Test match in Sydney against Australia which had previously been labelled “dysfunctional” by International Cricket Council investigators.

Contrary to reports that the case has been closed, senior ICC sources have indicated to The Daily Telegraph that it remains live, and the current wide-ranging police investigation by Scotland Yard will provide the Anti Corruption and Security Unit with valuable information needed to further question the team’s performance in their defeat to Australia at the Sydney Cricket Ground.

Pakistan are already stunned by the suspensions of Salman Butt, Mohammad Asif and Mohammad Amir for alleged spot-fixing during the Lord’s Test but will now face further awkward inquiries over a case they thought had been put to bed.
There were reports in Australia last night that Kamran Akmal, the Pakistan wicketkeeper, has been sent an official notice from the ICC that he is under investigation for his performance in the Sydney match, although the ICC has not confirmed this. He dropped four catches during the Sydney Test, a match Pakistan managed to lose from a strong position.

Over the past few days photographs have emerged of Mazher Majeed, the agent at the centre of an alleged spot-fixing scam, dining with the Pakistan players at an Indian restaurant in Perth just two weeks after the Sydney Test.

At the weekend the News of the World quoted Majeed as telling an undercover reporter how that match was fixed. He is filmed on video saying: “Let me tell you the last Test we did. It was the second Test against Australia in Sydney. Australia had two more wickets left. They had a lead of 10 runs, yeah. And Pakistan had all their wickets remaining. The odds for Pakistan to lose that match, for Australia to win that match, were I think 40-1. We let them get up to 150 then everyone lost their wickets. That one we made £1.3 million. But that’s what I mean, you can get up to a million. Tests is where the biggest money is because those situations arise.”

Yasir Hameed, the Pakistan batsmen, told an undercover reporter the match was fixed for £1.8 million but later backtracked saying he was referring to the newspaper story.

At a press conference last week Sir Ronnie Flanagan, the head of the ACSU, admitted his unit was “examining in detail” Majeed’s claims while also saying there is no concrete evidence of any financial motive for the team’s defeat. “We will be examining all the evidence that is brought forward in this particular case,” he said. “We certainly will go where the evidential trail takes us and if there is new evidence then we will examine that and with the investigative authorities in any given country, which in this case is Australia. At this stage we do not have such evidence to hand in relation to that tour or that particular match. We will be examining all that [the video evidence of Majeed] and are in the process of examining that in great detail. If that takes us back to a re-examination that is exactly what we will engage in.”

Pakistan’s tour to Australia was a disaster. The team lost every match in one-day and Test cricket. Mohammad Yousuf was sacked as captain and there were several lengthy bans issued to players, all of which have subsequently been rescinded.

The Sydney Test was a particular low point. Pakistan were in a strong position to win the match with Australia 51 runs behind in their second innings with only two wickets in hand. Akmal then dropped Mike Hussey three times as he scored 134 and, with defensive field placings, Australia were able to build a lead. Pakistan then failed to chase their 176 target.

It was a famous win for Ricky Ponting’s team but is now tainted by controversy and officials in Australia concede it may have been thrown. “At the time, we had felt we had won the match fair and square, but obviously that is somewhat tainted by these allegations,” said James Sutherland, the chief executive of Cricket Australia. “I’m certainly accepting that where there is smoke there is fire. The integrity of the contest is something that any sport must protect in the strongest possible fashion. It’s what the fans of the game rely on.”

The ACSU investigators will now almost certainly call for Akmal and other players to provide mobile phone records, if they still exist, of their time in Australia. Majeed was allegedly texted a month after the Test to warn him Akmal was under investigation. The text read: “Salam bro pls be careful if you are dealing with any financial matter with Kami I am sure you are aware he and one other player is very much into match fixing allegations [sic].”

It emerged yesterday that Akmal and Butt had been told to provide the ACSU with mobile phone records covering the Asia Cup in June. The pair were already being investigated before the News of the World expose was published during the Lord’s Test.

The England players and ECB were adamant they did not want Butt, Amir and Asif to play during the one-day series and Twenty20 matches but Akmal remains a part of the squad. He played in Cardiff last night and is expected to keep wicket during the Natwest Series which starts in Durham on Friday. -telegraph