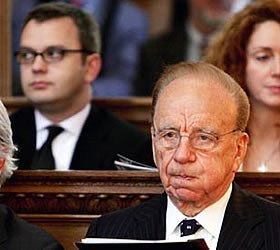 The Home Office abandoned plans to establish an independent inquiry into the News of the World  phone-hacking scandal last year after a senior official warned that the Metropolitan police would “deeply resent” any interference in their investigation, according to a leaked government document.

As Alan Johnson came close today to accusing Scotland Yard of having misled him over the scandal, a leaked Home Office memo shows that the last government decided against calling in Her Majesty’s Inspectorate of Constabulary after intense internal lobbying.

Stephen Rimmer, the Home Office director general for crime and policing, warned that Scotland Yard would “deeply resent” a review of its investigation by the inspectorate and that it would send a message that “we do not have full confidence” in the Met.

The leaked document emerged on one of the most dramatic days of the phone-hacking scandal which saw pressure mount on Andy Coulson, David Cameron’s director of communications and former editor of the News of the World, and on Scotland Yard.

As the government was forced to answer questions about the scandal in the Commons, there were further developments:

• John Yates, the senior Met officer in charge of investigating the scandal, said he was prepared to interview Sean Hoare, a former News of the World journalist who told the New York Times that Coulson knew about the hacking. Coulson, who denies the allegation, said he would be happy to talk to the police.

• Alan Johnson questioned the conduct of Scotland Yard after senior officers told him last year that every individual whose phone may have been hacked into would be informed. The former home secretary spoke out after his former government colleague, Chris Bryant, said that police took no action when it became apparent his phone might have been targeted.

• Bob Quick, a former head of specialist operations, expressed concerns about allegations in the New York Times that the Met might have been reluctant to investigate the claims because of its close relationship with News International. “If officers felt the investigation was being inhibited or suppressed, that must be a source of concern,” Quick said.

• Senior Tories started to voice doubts about whether Coulson will be able to withstand intense media pressure. “This is like a long gunpowder fuse,” one said.

Scotland Yard is facing renewed pressure after the leaking of a Home Office document which suggested that the Met was highly sensitive about any outside interference in its investigation. Officials raised objections when Johnson asked last year whether the inspectorate of constabulary should be asked to examine Scotland Yard’s handling of the case, after the Guardian published fresh evidence.

This challenged News International’s central defence: that just one rogue reporter was involved in phone hacking.

In an email on 13 July 2009 to Richard Westlake, Johnson’s private secretary, Rimmer wrote: “My own advice on this remains that there are insufficient grounds to do so … and that the Met would deeply resent what they would see as ‘interference’ in an operational investigation which could, of course, be revived at any given time.”

Rimmer also showed there was acute sensitivity about Yates, who was responsible for the police investigation into whether Labour had traded peerages for donations to the party. In formal written advice to Johnson on 14 July 2009, he said that calling in the inspectorate “could lead to accusations that … following recent exchanges with John Yates, we do not have full confidence in the MPS”. A spokesman for Johnson said he would not comment on a leaked document.

The leaked memo appeared as Johnson stepped up the pressure on the Met. He told MPs: “Last year I was assured that the Metropolitan police service had not received any allegations in respect of other News of the World journalists. I was also told that the Metropolitan police had taken all proper steps to ensure that where there was evidence of phone tapping or suspicion of phone tapping the individuals concerned would be informed.”

Chris Bryant, the former Europe minister, claimed police did not keep him properly informed after it became clear that he may have been targeted. Bryant told MPs his phone company said his phone had been hacked into.

“I told the police about this months ago and they have done absolutely nothing about it,” he said.

Theresa May, the home secretary, dismissed calls for a judicial inquiry, though she voiced support for the Met.

“Any police investigation is an operational matter in which ministers have no role. The Metropolitan police have indicated that if there is further evidence, they will look at it. That is the right course of action and it is right for the government to await the outcome.” -guardian