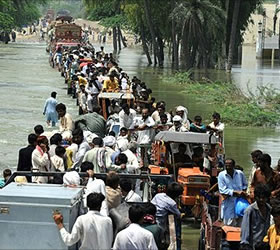 ISLAMABAD, Sep 6 (APP): Prime Minister Syed Yusuf Raza Gilani on Monday called for collective efforts to rehabilitate the flood affected people by rising above political affiliations and assured transparency and “zero tolerance” in collection and distribution of donations.Addressing a meeting of the Council of Common Interests(CCI) here at the PM Secretariat, attended by the four Chief Ministers, federal ministers and senior officials to discuss the situation in the wake of worst ever flooding, Gilani stressed the need for drawing a strategy to deal with this national catastrophe.

He said adverse effect on future economic growth will also off-set the financial gains made by the government in the last two years.

“We will have to re-prioritize our economic goals and drastically cut-down expenditures. I expect full cooperation from the provincial governments in this regard,” Prime Minister Gilani said.

He said the CCI was the most appropriate forum to handle these issues in an equitable manner, as it has the mandate to formulate and regulate policies in relation to matters concerning provincial and the federal governments.

He called for a strategy to deal with this national catastrophe with special emphasis on immediate relief measures, planned rehabilitation, a sustainable reconstruction plan and equitable utilization of flood relief funds and items.

He said it would be made in a transparent, fair and judicious manner through an institutional oversight mechanism which meets international standards.
“We need to make a collective plan for our distressed brothers and sisters, without a consideration for political gains, party affiliation or regional preferences.”
He said for him every flood affected whether from Gilgit-Baltistan, AJK, Sindh, Balochistan, Khyber Pakhtunkwa or Punjab was as dear as his own kith and kin.
“Our immediate task is to save the lives of the people stranded in the flood affected areas,” the prime minister said.

He said rescue operations were successfully being carried out with the help of Army, Navy and the Air Force.

Regarding the collection and distribution of funds, Prime Minister Gilani said “let me categorically assure everyone that there shall be no discrimination in distribution of the available resources.”

He said every penny received and each item collected would be distributed to the provinces, by the Federal Government, in a most transparent just and equitable manner.
“I have instructed the concerned agencies that there will be zero tolerance for misuse of authority,” he added.Prime Minister Gilani said as the water recedes in various areas the affected will have to treated for illness, mal-nourishment and psychological trauma.
“We have to help them, rebuild, rehabilitate and recuperate.

As the world watches, we cannot drop the ball.”
He called for focused and targeted relief and rehabilitation efforts through provincial governments and said Early Recovery, Rehabilitation & Reconstruction Strategies were a priority.

He said though oversight will be done through an institutional mechanism, the utilization in terms of assessment and priorities will be carried out by the provincial governments themselves.

“I must advise the Provincial Governments to regulate and distribute the goods without prejudice, in the most transparent and equitable manner. Let history be testimony to an objective display of judicious resource distribution,” Gilani said.

He said while learning from the experience of earthquake of 2005 and IDPs resettlement, the Federal Government will ensure effective policy formulation and monitor rehabilitation and reconstruction efforts on a steady pace.

“Let’s today resolve, for the sake of all the affected people, whose lives are in peril, to do some thing for them, to enable us to look forward with hope and to look backwards with pride.”

“We must not fail, as failure is not an option.With Allah’s blessing and the zeal and courage our nation has historically show, I am certain that we shall once again, be able to bring back the smiles on the peoples’ faces,” Gilani said in an impassioned appeal.
The Prime Minister also gave an overview of the flood damages that have played havoc in 79 out of 124 districts causing massive damages to the standing crops, over 1.3 million acres.

“In my visits to the flooded areas all over the country, I have witnessed horrible tales of fear and deprivation,” he said.

He said around 20 million people were seeking help, over 1752 have lost their lives while 2697 are injured.

He said over 1.349 million people have been rescued by helicopters and boats by our valiant Army, Navy and Air Force.

About 1000 bridges and over 4000 KMs roads have been damaged, re-construction of which would cost Rs.8 to 9 billion. 1/5th of irrigation infrastructure, livestock and crops have been destroyed. WAPDA and PEPCO cumulative losses exceeds Rs.13 billion.
Gilani said a total of US $ 953.7 million has been pledged by donors through UN system and bilaterally so far.

The government through National Health Emergencies Preparedness & Response Network (NHEPRN), under the Ministry of Health has provided essential drugs, Field Hospitals, Medical Teams and medicines to cover the health needs of 2.5 million people affected by the floods.

He said over 77 countries have contributed in cash and kind towards the relief for flood affected people. The IMF has lent emergency financial support to Pakistan. World Bank, Asian Development Bank and other donors have also promised to redirect and fast track their existing commitments. The United States, United Kingdom, Kingdom of Saudi Arabia, Germany and many others have noticeably participated in this humanitarian endeavour.

Gilani said Foreign Ministers of 27 EU Countries are informally meeting in Brussels on September 10 to unveil a multi-faceted growth and development strategy.
This reflects a growing thinking that Pakistan not only needs emergency humanitarian assistance but also a medium term development and reconstruction, disaster preparedness support.

He said the PM’s Flood Relief Fund has received generous contributions of over Rs.4 billion, while the provincial governments and NGOs have also launched their own relief efforts and were reaching the flood affected people in a big way.

During the meeting Gilani also condemned the recent suicide attacks in Lahore, Quetta and Lakki Marwat that have claimed over 100 precious lives and injured scores of civilians, at a time when our nation is faced with a natural calamity of colossal proportions.

“It goes to show that terrorists have no creed except bloodshed and chaos, and are desperately carrying out their agenda regardless of the precarious conditions. I want to stress today that we shall never let their nefarious designs succeed and will eliminate them.,” the Prime Minister added. -App