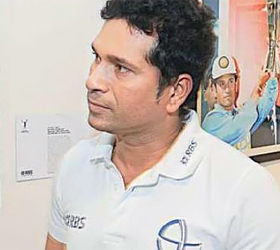 Sachin Tendulkar’s always been fond of the movies, but it was Aamir Khan  who remembered when they first met – even though Sachin was a novice being tried out for the team, and Aamir was an established actor.

aOn a visit to Delhi, the cricketer, already a legend at 37, recounted, “I remember meeting Aamir in 1990 when I’d come back from Pakistan, when that movie came out, where all four of them have acted… ” Andaz Apna Apna”, that’s right. Before that, I met Aamir when he was shooting at CCI, Brabourne Stadium, Mumbai. I was 14, and invited by Dilip Vengsarkar, the then captain of the Indian team, to bat at the India nets. The Test squad was practicing and he made Kapil Dev bowl at me. I just wanted to make sure I gave a first-class performance, and Aamir was shooting. I was a bit caught up, but Aamir reminds me. He’s a big cricket fan, he also plays sometimes.”

(That’s exactly what Aamir had told TOI two years ago, when he recounted being very impressed by the kid he saw at the nets as he was talking to seniors in the team.) Today, of course, that ‘young kid’ is perhaps the most famous cricketer in history.

First ever press con
Sachin was in the capital to talk about a photo exhibition of the 21 most memorable moments of his career, as he completes 21 years in cricket, put together by the Royal Bank of Scotland. Pointing to a rare picture of his 1990 England tour, Sachin reminisces about his first press conference. “The funniest part was the press conference, because that was the first press conference of my life. It was at Old Trafford and I was man of the match. I didn’t know what to expect and I didn’t know how to respond, so I was very tense and kept asking players in the dressing room what was going to happen. My manager and coach at the time, BS Bedi, as confident as ever, said, “Just go ahead! What you’ve done on the field, you need to go and do the same thing here.”

But has dealing with celebdom gotten any easier? Sachin admits that he’s now more relaxed with the media, where he was usually “very serious” earlier. He also says that he’s never felt that media attention has invaded his privacy. He does say, however, that his shyness was once a liability. “I’m a little shy, I take time to open up,” says he, “Earlier, a lot of people misunderstood me because I never spoke much. They thought that I was snobbish and didn’t care, but it was just that I was too shy, I was too embarrassed to appreciate what was happening around me. Most of the time, I would look down. That’s something that happens even today – when I’m shy or embarrassed, I just cannot look at people, I look down, and that’s my way of saying, ‘thank you very much for everything.’ But I’ve been brought up in a family that’s appreciated whatever has happened around my cricket, and not taken anything for granted, and that’s what I was taught by my father – that whatever profession I choose, I should give it my hundred per cent and not take anything for granted. The moment you do, he said, that’s the beginning of your downfall. But the adulation, support and love I’ve received over the years has been something special, and I find it hard to express what I feel.”

Great and grounded
So the stardom never went to his head? “It happened when I was 16 years old,” says Sachin candidly, in a surprising confession by a player seen as among the most grounded ones in the game. “At 16, you think differently. But very early in my career, I realised that God’s been kind to me, that there are guys who work equally hard and I’ve been fortunate enough to play for India. I scored well, but you need God’s blessings to be where I am. From the beginning, the unwritten law at home was, you think about the next match and let other people talk about whatever has happened today. Right from my school days, my brother would make sure that I think about the next match – if I had scored 125, how would I go out and score 150 in the next match? It was all about getting better, and I’ve honestly just looked at that and nothing else. I mean, I know it’s easy to lose your head because you’ve achieved something that’s been your dream for so long. At that age, it’s natural to feel special. But it’s also equally important to realise that this is just the beginning. To get there is tough, but to stay there requires more effort. So it’s important that the individual realises that as early in life as possible.”

He does admit, though, that there was a point when he was not complacent. “Yes, there were times when I became aggressive. That’s natural, sometimes. But I’ve never been a complacent player in my life – I’ve always had sleepless nights before Test matches and ODIs, and especially Test matches. It doesn’t matter if I had 120 Test caps, I’d still have sleepless nights. But that’s the only way my body gears up for a big game. And now I know that that is the way I prepare, and I’ve learnt to deal with it. Earlier, I’d be restless, but now if I can’t sleep, it’s okay, I know that’s how my body prepares before a big event,” says he.

In that case, what is he likely to be doing the evening before a match? “I keep things as normal, as natural, as possible. If I feel like watching a movie, I’ll do it, or sit alone in the room, or if I feel like going down to the restaurant, I’ll get something to eat. But the point is mainly to do something which is going to help me perform better the next day. I don’t have a set formula as such, that at 8pm I have to eat and at 8.30pm I have to be in bed,” he replies.

Aggression should be inside, not out
Sachin mentions that with the advent of T20, the game has become more “attacking”. Does he mean that players are more aggressive now, and is that an improvement? “I think aggression should be inside rather than outside,” he replies quickly, “If you look someone in the eye, you should be able to convey the message without actually speaking too much. Aggression always works well when it’s controlled, but if, in trying to be aggressive, you lose control over yourself, you cannot bring the best out in you. It’s not about being vocal – without being vocal.”

Speaking of younger players, does he share the concern that some people have control over the players’ lifestyles? What about Dhoni’s infamous ‘partying’ remark? “There were parties during the IPL, but then it was up to an individual whether to go to that party or not. I didn’t go to any. If an individual takes that responsibility and makes sure that whatever he’s doing only helps to make him play better, doesn’t distract him from cricket, then it’s okay – if he thinks, I want to be in top condition to go out and play whenever I’m expected to, and I have to be prepared to the best of my ability so that I can deliver. No one can guarantee performance, but the preparation before that, or giving your 100 per cent on the field, can always be guaranteed, and that’s what matters to me. But each individual is going to be different. My lifestyle was always simple – I was never someone who liked partying – I was happy going to restaurants, enjoying good food and getting back to the room. But it depends on every individual – what they want from life and how they want to play.”

But there are no changes in his routine, now that he’s been playing for so many years? “There are changes. Earlier, I’d prefer to stay in the room, and I do even now, but now I go to restaurants more often and enjoy good food. I like all kinds of cuisines – right from Indian to Thai, Japanese, Malaysian and Chinese. I do go out sometimes, probably more than earlier,” he says. He clearly goes out more often – he seems much more comfortable being seen with friends from the film industry, people like Aamir, whose films’ screenings he’s attended. Is he fond of movies? “I’ve always been fond of films,” says Sachin. “Whenever I get free time, I go and watch a movie, but it’s a rarity. A couple of films I’ve seen recently include “Peepli Live”, and Aamir, who’s a good friend, invited me for that screening. Then there was a Marathi movie that I watched – “Natrang”, Atul Kulkarni, the lead actor, invited me there.” And what did he think of “Peepli Live”? “I thought it was very nice, a different film,” he says.

My God
Another little thing about Sachin that’s widely known is that he’s a regular visitor to the Siddhivinayak temple in Mumbai. What are his plans for Ganesh Chaturthi? “It’s going to be a little difficult, but I do go, and not just because it’s Ganesh Chaturthi. I go whenever I feel like visiting,” he says. While on the subject, whatever happened to the film on Siddhivinayak that he was to feature in? “They wanted me to say a few lines on Siddhivinayak, and I’ve already recorded my parts – it’s about how I feel at the temple,” he says, “I don’t know when it’ll be out; it’s more of a documentary than a proper film, but they just wanted my reaction.” And does he have any plans of being on the big screen? “I don’t know,” he laughs. “Right now, the big screen for me is only cricket.”

Aamir Khan
I saw him doing net practice at Brabourne stadium, he hadn’t been selected then. I was talking to Kapil Dev and Dilip Vengsarkar, and I said, “Who’s that kid? Yeh toh kamaal ka khel raha hai, he should be in the team! I didn’t know then that he’d actually be selected soon
– As told to DT in Dec 2008 – Timesofindia

Asif too dark for me: Neetu