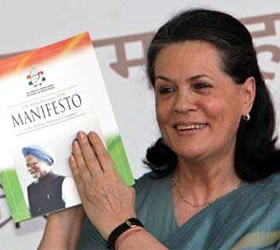 KARACHI (APP) – President Asif Ali Zardari on Sunday evening had a telephonic conversation with Indian Congress leader Sonia Gandhi and felicitated her on election for the fourth time as the party president.
Sonia thanked Zardari for the message of felicitation, says a statement issued here from Bilawal House.
The Indian leader also offered condolences and sympathies over the flood devastation in Pakistan and expressed the hope that the people and government of Pakistan would triumph over the tragic destruction.
The president said the floods might have been caused by climate change and emphasised that the countries in the region needed to work together for meeting the challenges of the phenomenon.
Concurring with the president, Sonia said climate change was a trans-national issue that could best be addressed through regional and international cooperation in addition to efforts by individual countries – Nation