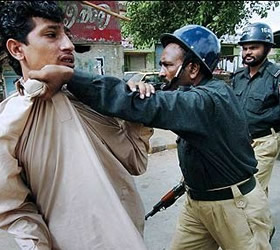 QUETTA: Quetta police on Saturday conducted raids at different places in the city and arrested over twenty accused in suspicion of their involvement in suicide attack on a procession taken out on Friday to mark Youm-e-Quds.

The suicide bomb blast at Mizan Chowk killed seventy-five people and injured more than two hundred as it was followed by indiscriminate firing. Officials in Quetta say they are still looking for the top members of a banned organization called Lashkar-e-Jhangvi which has claimed responsibility for one of the worst suicide bomb blasts that have ever taken place in the history of Balochitan.

According to police sources reacting to tip off, police parties raided at some places and arrested persons of band outfits. However, more details were not disclosed to the media due to the sensitive nature of the case, they said.