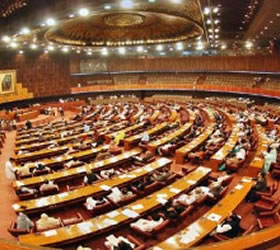 ISLAMABAD, Sept 4 (APP): The National Assembly session,requisitioned by the Pakistan Muslim League-Nawaz, was on Saturday adjourned sine die after completion of agenda  discussion on situation arising out of devastation by floods. The 24th session of the Lower House of the Parliament, started on September 2, in its all three sittings kept the question hour, calling attention notice and other agenda items suspended to take up the sole agenda item.
The House was adjourned on the first day without taking up agenda to condole the death of Minister for Local Government and Rural Development Abdur Razzaq Taheem, after offering Fateha for deceased soul.In the third sitting, Prime Minister Syed Yusuf Raza Gilani gave a policy statement on the overall floods situation amidst discussion on the motion that was taken part by members form both sides of the aisle.The discussion was winded up by Minister for Law, Justice and Parliamentary Affairs Dr Babar Awan.Later, Nadeem Afzal Gondal, the chair, read out the Speaker’s orders proroguing the House under powers conferred by Clause (3) of Article 54 of the Constitution – App
Previous Post

Behind the photograph: the human face of Pakistan’s deadly flood

Behind the photograph: the human face of Pakistan's deadly flood