Lord Nazir Calls For Probe Into Diversion of Flooodwaters to Balochistan 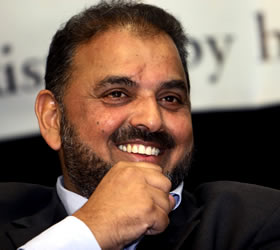 QUETTA: A Member of British House of Lord, Lord Nazir Ahmed, has called for a judicial inquiry over diverting floodwater toward Balochistan from Sindh in order to secure the Shahbaz Airbase.

He made this demand while addressing a news conference at Serna Hotel Quetta on Saturday arranged by Muslim Hands which is currently engaged in relief activities in flood-devastated areas of Pakistan.

“If the floodwater diverted to Balochistan in order to protect the Shabaz Airbase then Government of Pakistan must carry out a judicial inquiry in this regard. If Pakistan fails to conduct an inquiry then House of Lord will demand the Supreme Court for an inquiry,” he said adding that it is a criminal act and on the other hand Balochistan is already suffering from long deprivation.

He said that Muslim Hands making all out efforts to help the flood victims in their hour of need and also helped the people of Balochistan during the long drought in 2000 and earthquake in 2008.

“In England not only Muslim community but people of other religion and ethnic also contributing in relief assistance and showed their generosity while providing money to help out the brethren country in this critical juncture,” he added.

Lord Nazir said that Muslim Hands had contributed three million pounds so far and the organization will also participate in rehabilitation. “1800 pounds had been sent by prisoners from a prison of an England. He informed Muslim Hands will intended to construct hundred houses in each affected provinces for the flood victims.

“I will resume a campaign at an international level for flood victims when I return to England,” he maintained. He said that Pakistan does not need loan in this time of need but need assistance for rehabilitation process. “The IMF must write off the load taken by Pakistan and also provide more aid and assistance,” he appealed.

The member of British Parliament, Yasmin Qurashi said that some elements are involved to project Pakistan negatively thus international aid agencies are not coming forward and not playing their due rule in this crucial moment. “Only Indian Muslims had contributed 6 thousand pounds,” she said.

The head of Muslim Hands, Sahibzada Sayed Lakht Hasnain had informed the media that the organization is providing assistance to 12, 000 people in relief camps set up in Sibi and in Quetta. He assured that the Muslim Hands will continue to help the affected people till the end of rehabilitation process. He said more than one million people had been rendered homeless. Muslim Hands will compensate those people who lost their livestock and agriculture land. He said that the delegation will visit the flood affected districts of Balochistan today and review the relief efforts being carried out by Muslim Hands – Thebalochhal