Floods in Pakistan Carry the Seeds of Upheaval 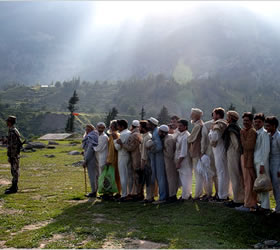 THATA SIAL, Pakistan — When the governor of Punjab Province arrived recently in this small town with truckloads of relief goods for flood victims, his visit was as much a political mission as a humanitarian one. His message to the hundred or so displaced people gathered under an awning was that the government was there for them.

“The people say this was an act of God,” the governor, Salman Taseer, said in an interview after reassuring the crowd. “But what comes now, they say, is the act of man. If we don’t deliver, they will not forgive us.”

After scathing criticism that they were unprepared for the disaster and inept in their initial response, government officials, ministers and even President Asif Ali Zardari are crisscrossing flood-affected areas of the country in a frantic effort to ease public anger and despair.

Pakistani officials, diplomats and aid workers warn that while civil unrest has so far been averted, the aftermath of the worst-ever flooding in Pakistan could destabilize the country in the months to come and aggravate the already deep regional, sectarian and class fissures.

Management of the disaster has added to the distrust that many Pakistanis already feel for their civilian political leaders, while the armed forces have burnished their image performing rescue and relief missions along the length of the flooded areas.

There have been angry accusations from politicians and flood victims that officials have guided relief to their own party supporters, and serious allegations that powerful landlords and politicians diverted surging floodwaters to protect their own lands at the expense of others.

Most political commentators say the president and his government are safe for the time being, if only because no one wants to take on the immense responsibilities of the crisis. And the main opposition leader, former Prime Minister Nawaz Sharif, does not appear ready to test his party in national elections.

The coalition government, headed by the Pakistan Peoples Party, has been in power only two years. After nine years of military rule before that, the army chief, Gen. Ashfaq Parvez Kayani, seems to have little appetite to take on direct management of the country while he can enhance the military’s image away from the political limelight.

The real dangers for the government may lurk once the first phase of the emergency passes. Many flood victims will accept immediate hardship, but will be less able to withstand prolonged hunger and homelessness, Pakistani officials and aid workers say.

Demonstrations by flood victims have so far been only sporadic and mostly peaceful. In one typical episode on Tuesday, village women sat blocking traffic for 20 minutes across a main highway in southern Sindh Province, until the police promised to make sure they received some aid.

But the government, already saddled with severe economic and security problems, may not survive the large-scale social upheaval and long-term hardship from the floods — including a lack of housing, food shortages and price spikes — officials, diplomats and aid workers warned.

The floods have affected an estimated 20 million people, an eighth of the population. Millions of dollars’ worth of crops and livestock have been lost. No region has escaped the destruction.

The floods are still devouring villages and farmland in the southern province of Sindh, and about 800,000 people remain stranded and without food, Josette Sheeran, executive director of the World Food Program of the United Nations, said in an interview during a visit to Pakistan last week. Nearly 10 million people are considered short of food and their situation will remain precarious for six months to a year, she said.

Ms. Sheeran, too, warned of more dangerous long-term effects. People face a triple threat, she said: loss of crops, loss of seed for the next planting season and loss of a daily income.

Amid the emergency, politicians seem to have become absorbed in scoring points and squabbling, which has added to the disillusionment many Pakistanis already feel for their leaders, many of whom are rich landowners.

Much of the media and the main opposition leader, Mr. Sharif, castigated President Zardari for going ahead with a visit to France and Britain when the floods first occurred, and expressed doubts that the government would manage the inflow of assistance honestly. Mr. Sharif suggested an independent commission to oversee the relief effort, an idea President Zardari swiftly rejected.

Mr. Taseer, who like the president is a member of the Pakistan Peoples Party, took a swipe at Mr. Sharif in his speech here to flood victims.

“Nawaz Sharif is in Murree right now, but I am not criticizing him,” he told them, referring to the resort in the Himalayan foothills where the Pakistani elite spend hot summer months. “We have political differences but this is the time to put them aside.”

That has not been the case. The leader of one of the government’s coalition partners, Altaf Hussain, who runs the Muttahida Qaumi Movement from London, suggested that “patriotic generals” should step in to lead the country in such a crisis, a reminder that he could cause the government to collapse if he chose to pull out of the coalition.

One of the most angry accusations has come from Mir Zafarullah Khan Jamali, a former prime minister whose constituency in the province of Baluchistan has been almost totally inundated.

Mr. Jamali criticized members of the government, accusing them of intentionally redirecting floodwaters through Baluchistan and inundating the homes and farmlands of one million people in the country’s poorest province.
Much of Baluchistan is already embroiled in a separatist revolt, and Mr. Jamali warned that the latest careless treatment by the government would only worsen the popular mood. “A Baluch does not forget what happens to him,” he said.

Beneath the political sparring, intense and sometimes lethal tussles for power have erupted, both locally and nationally.

Political power struggles in the country’s sprawling port city of Karachi have degenerated into an ethnic turf war between two parties in the governing coalition, the Muttahida Qaumi Movement, whose support base is drawn from Urdu-speaking immigrants, and the Awami National Party, whose base is mostly Pashtun. Targeted killings left 165 dead people in August, including some senior political figures.

Now tens of thousands of people displaced by the floods, most of them ethnic Sindhis, are arriving in Karachi, adding a volatile new element to the political dynamic there. While Sindhi nationalists are welcoming them, opponents, like M.Q.M. members, warn that they will create more violence.

Then there is the continuing threat from the Taliban and other militant groups, which has not subsided. They will look for every opportunity to continue their campaign of violence and to stir sectarian strife, officials warned. Last week alone, bomb attacks against Shiite religious processions in Punjab and Baluchistan killed more than 90 people and wounded more than 300.

Along the length of the flood region through Punjab and Sindh Provinces, displaced people said they expected little help would filter down to those who deserve it. “The influential ones are getting all the money and the poor will get nothing,” said Wazir Ali, 23, whose family was camping beside a road outside the town of Sukkur in Sindh.

A farm laborer, Qaim Din, 50, said he feared going back to his village when the floods receded because the family would have nothing to eat. “We will die of hunger,” he said. “We are very poor.”

He was not optimistic about government promises of assistance. “We hope, but we will be sure of it only when we get it,” he said – Nytimes