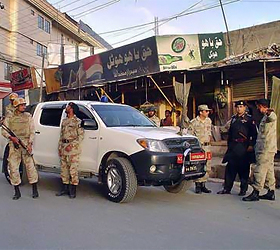 QUETTA: Two people were shot dead by unidentified men in Hazarganji, the outskirt of Quetta, on Friday. Police termed the incident as result of an old enmity.

According to official sources, the victims were security guards of younger brother of Chief Minister Nawab Mohammad Aslam Raisani. The dead bodies were taken to Civil Hospital Quetta for autopsy where they have been identified as Ghulam Haider and Mohammad Murad.

The victims were passing through the Raisani Town when assailants ridding on a motorbike opened fire on them. The assailants managed to flee from the scene after committing crime. It was case of an old enmity and police are making investigations into the matter.

Meanwhile, two persons died when a Minar of a Mosque collapsed in Kuchlak. Both the victims are stated to be laboureres and were busy in work under construction – Thebalochhal