It isn’t over yet ! Sindh, Punjab and Balochistan will face after-effects of heavy rains 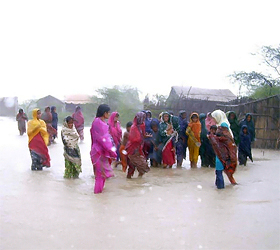 While South Punjab, parts of Balochistan and Sindh are trying hard to cope with the after-effects of heavy rains in late July and early August, weather experts have forecast fairly widespread rains in northern parts of the country in 24 hours. Rains are expected to be moderate at most places, but could generate flooding in some urban areas.
In areas, rains could be heavy, but not as much as the earlier spells which had generated floods. The oncoming spell of rains would be generated by a trough of a moderately strong westerly wave and strong monsoon current from the Arabian Sea. The westerly wave is likely to persist over Afghanistan and bordering areas of Pakistan for at least three days. This time, besides affecting upper Punjab and Sindh, Hazara Division which had by and large been spared by the recent floods, with the exception of Kohistan district, would also be lashed by heavy rains. This would add more water to the already swollen rivers and might increase the intensity of the damage downstream. Water levels in Sutlej and Ravi have been rising gradually during the last one week.
Ten days back, a major flood surge of 55,000 cusecs passed by from Head Sulemanki on Sutlej and the flood-warning centre warned a few days back of yet another flood onrush, of a similar magnitude at Head Sulemanki. So far Sutlej and Ravi have had a moderate flow, but with heavy rainfall in the catchment areas of these rivers both are likely to be flooded. The two once mighty rivers had been tamed as a result of major reservoirs built by India after the Indus Water Treaty in 1960. Much would depend on the quantity of water India decides to release from these reservoirs.
On Tuesday information minister Kaira told media that India had yet to inform Pakistan it was releasing the additional water. It is understood that the reservoirs built to store water from the two rivers are already full to their capacity. A news item meanwhile tells that Indian side has officially warned that extra water from Bhakra dam might be released in the next twenty-four hours. There are already reports of Sutlej water overflowing the banks and flooding the riverine areas near Basirpur in Kasur district. The districts in Punjab which would face the wrath of the Sutlej River include Vehari, Kasur and Okara which had so far been left unaffected and Bahawalpur. Water level is also rising in Ravi and the river which is presently in low flood has inundated a few villages on its way. The Lahore City District Government has already issued two flood warnings to residents of various localities, some of them constructed on the riverbed.
One expects India to promptly release the statistics regarding water being released from its dams. Time is of basic importance. What is further required is alertness on the part of Pakistani authorities. As the flow in the two rivers had become insignificant after the construction of dams on the Indian side, scores of thousands of people had built houses on the riverbeds. Similarly, numerous small factories had sprung up in the area. During the recent floods the largest number of human casualties and loss of property occurred in areas like these which had come into existence on the Indus and its tributaries.
Failure on the part of the administration to issue timely warning to the people led to tragic consequences. It is not enough however to issue a warning alone. The people living in danger zones have to be assisted in removing their families and animals that constitute in many cases their entire source of earning. The monsoon system likely to hit most of the upper and lower Khyber-Pakhtunkhwa, parts of Punjab and Sindh would hopefully not exceed the time limit predicted by the meteorological department. While hoping for the best the government has to brace itself to face the worst – Larkanatimes