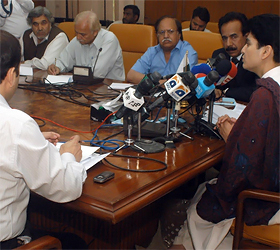 QUETTA: The Balochistan government will demand Rs 100 billion from the federal government for the rehabilitation of flood-devastated districts.

According to official sources, a committee had been set up to carry out survey in flood-stricken districts has submitted its initial report regarding the destruction caused by flash floods. More than Rs 100 billion losses have been reported as flash floods spare nothing.

“The provincial government will also decrease the non-development expenditure and divert the allocation towards rehabilitation,” a senior official said. However, there are no indications that the MPAs will surrender their personal MPA funds and divert the resources for relief operations for flood affected.

Talking to media, Focal Person for flood relief affairs, Raheela Durrani has said that Islamabad had so far provided Rs 50 million only. Balochistan will ask more financial assistance once the survey is concluded.

The torrential rains and flash floods commenced from July 22, and continued to date have severely affected 12 districts of Balochistan where huge human settlements had been affected and ten of thousands of houses were washed away rendering more than 0.6 million people homeless in Naseerabad Division alone. The worst affected districts are included Sibi, Naseerabad, Jaffarabad, Jhal Magsi, Bolan, Kachhi, Barkhan, Kohlu and Loralai – Thebalochhal