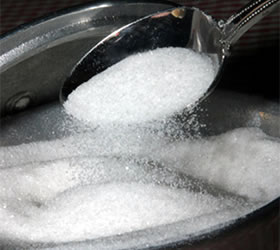 PESHAWAR: Sugar crisis has once again reared its ugly head in the provinical capital and its suburb localities because of official negligence.

Sources told the Statesman on Monday that the price of the commodity has been increased twice during the holy month of Ramazan, clearly pointing out the absence of a proper mechanism of checks and balances on part of the government.

Dealers in the main Rampura Gate were of the view that those complaining about the shortage of the commodity were in fact trying to create artificial sugar crisis in the metropolis where abundant stock was available sufficient to meet the local requirements for many days, they claimed.

The dealers claimed that they were purchasing commodity at Rs77/kg while selling it at Rs78 in the markets; however, people were compelled to get it at Rs80 to 85 from shopkeepers in various localities.

Sources said that the devastating floods and subsequent emergency situation in Khyber Pakhtunkhwa provided an opportunity to sugar mafia to make quick bucks by fixing the rates of the basic item at their sweet will.

Surprisingly, sugar is also not available at utility stores across the city for last one month, creating immense difficulties for the consumers.

Sugar is considered to be a necessary item consumed every day, used in various desserts, hot drinks and cold drinks on a regular basis.

During the month of Ramazan, people use extra sugar for soft drinks and desserts.

The post-flood situation of sugarcane is very bleak; consequently sugar production is also expected to be far lower than demand.

Combining all odds with the ongoing flood crisis in the country, it is very obvious that Pakistan can potentially face a severe sugar shortage, unless a timely arrangement is not made for import.

PESHAWAR: The first consignment of consumable medical supplies and equipment, received from Canada as gift was handed over to FATA Secretariat for its suitable utilisation in FATA.

These medical supplies and instruments were collected in Canada and being shifted to Pakistan under the banner of a Canadian firm FINCON. Governor Owais Ahmed Ghani was on Monday given a briefing in this respect here.

During the briefing it was told that the instruments and supplies would reach Pakistan in 19 containers, among which 11 will reach during this year and the rest in next year.

The governor appreciated the initiative and offered gratitude to the collectors and other respective firms and organisations facilitating its delivery.

He said that these medical supplies would help augment the health sector service delivery in FATA and would be used on need basis through different health institutions including periodical free medical camps and medical camps for IDPs.

Owais hoped that more such non-governmental organisations, the private sector and individuals would come forward to help the ailing humanity particularly in this time of distress.

He directed the FATA Secretariat and Health Directorate FATA for suitable utilisation of the gifted medical aid.

Addressing at a press conference here at the press club after a meeting of campus joint action committee, held at the university campus, in which presidents and general secretaries of teachers’ associations expressed deep concern over non-implementation of the salaries increase.

The meeting was attended by the officials of all universities senate and syndicate.

Peshawar University Teachers’ Association (PUTA) president Dr Johar Ali said that all the provincial departments and federal bodies have passed on the benefit to their employees, but more than 13,000 universities employees were deprived of their right.

Johar said the non-implementation of the decision by the federal government was creating frustration among the teachers community.

He criticised that the federal government and Governor Owais Ahmad Ghani, who is also Chancellor of the public sector universities of the province, for delaying tactics over the matter.

The PUTA president further added that the teachers’ community had been deprived of the benefit on the pretext of resource crunch.

Johar further said the university administration has been asked by the government to generate funds from their own resources for the increase in salaries.

The teachers have also suffered from the devastated floods in the province, he maintained.

He termed that the non-implementation of the raise was injustice with them and demanded immediate imposition of the decision.

Faithful to sit in Itekaf today

PESHAWAR: Like other parts of the country, the faithful in the provincial capital are preparing to sit in Itekaf from today.

As the last Ashra of the holy month of Ramazan sets in, some people go for the Itekaf on the premises of the mosque and remain there till the sighting of the Eid moon.

During the Itekaf period, people spend their time reciting the Holy Quran and praying to God. The whole month is thus marked with great religious fervour and everyone tries to do whatever good they can to seek God’s blessings.

In order to facilitate the faithful during Itekaf, special arrangements have been made at major mosques of the provinical metropolis including Jamia Masjid Qasim Ali Khan, Masjid Zarghoni Hayatabad, Masjid Mohabbat Khan, Madani Masjid and Masjid Darwaish.

In view of fragile security situation, police personnel have been deployed outside mosques in sensitive parts of the city. – Online

PESHAWAR: The entry test for admission to the BS programme under University of Peshawar was held on Monday by National Testing Service, in which 3,400 students from the pre-medical background participated.

The test was held in six examination centres here on the second day as well.

The result of the entry test is likely to be declared till September 2 after which it will be on displayed on the university and NTS website on the same day.

It is worth mentioning here that the admission to around 2,000 candidates would be given to the candidates who successfully qualify the test in 26 departments in the university.

PESHAWAR: World United Ulema-o-Mashaikh Council Monday announced to visit different countries of the world for raising of donations for flood affectees and urged the world community for generous donations and provision of assistance in reconstruction and rehabilitation of the flood affected areas.

Speaking at a press conference here at the press club, chairman, of the council, Maulana Muhammad Shoaib said that the Ulema and members of the council are separately carrying relief activities in flood-hit areas of the province.

The council also hinted to get support of religious scholars and leaders of Afghanistan, India, and Iran for the cause.

The Ulema of Afghanistan have also been affiliated with the council, whereas the Indian and Iran religious scholars and leaders have been contacted.

Sohaib said the council will announce funds following the generation of donations through foreign trips.

Explaining aims and objectives, the chairman said that the council will make efforts for solution of the sectarianism, terrorism, extremism, lawlessness, instability and other challenges faced by the Muslim Ummah.

Accompanied by Secretary General Syed Mehmoodul Hassan, he said the council would try its level best for promotion of tolerance, magnanimity, unity and brotherhood across the globe.

“The council will be non-political and not used as a platform for holding portfolios and other vested purposes,” he maintained.

All kinds of conspiracies hatched against the Muslim Ummah will be foiled through the council platform, he added.

Shoaib further said the council would also play role for removal of common differences and committees would be constituted for the purpose.

He announced that the “Juma-tul-Vida” will be observed as Yaum-e-Palestine (Day of Palestine) in solidarity with people of Palestine.

To a query, he said the council’s activities would be formally launched following joint consultation, whereas measures would be initiated for maintaining peace during Muharam. – APP

PESHAWAR: The Ambassador of United Arab Emirates in Pakistan Ali Saif Sultan Al-Awani called on Governor Owais Ahmed Ghani here on Monday and discussed matters in connection with relief activities of the UAE Red Crescent Society for the flood affectees.

Ali Saif Sultan, who earlier had visited flood affected areas especially expressed deep sense of sympathy and fraternity on behalf of the government and people of UAE over the human and property losses in Khyber Pakhtunkhwa and FATA because of flood disasters.

He also briefed the governor about the humanitarian help and assistance being extended by UAE government and its people through various means to help the Pakistani brethren.

Speaking on the occasion, the governor thanked the guest for the generous support and assistance which the government and people of UAE are extending in this hour of trial and conveyed best wishes on behalf of the people of the province and FATA.

Owais stated that the Muslim brethren of UAE and especially the UAE Royal family had a special place in their heart for Pakistan and were always at the forefront in helping the people of Pakistan in times of crisis and disasters.