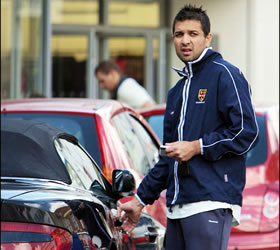 ‘We made £830k when Pakistan collapsed in the Aussie match’

CRICKET rigger Mazhar Majeed boasted that cheating in the sport is rife, with one controversial Test this year netting a shady betting syndicate more than £830,000.

His revelation that fixes go on in all forms of the game – Tests, One Dayers and Twenty20 – will horrify millions around the world who follow the sport.

And they will force cricket authorities to confront, once and for all, the match-fixing rumours that have dogged the noble game for years.

High on their list of investigations will be the Second Test between Australia and Pakistan in Sydney last January.

At the start of the fifth and final day Pakistan were in a supremely dominant position… but managed to lose dramatically.

Australia led by a mere 49 runs with just two wickets of their second innings remaining and with only one recognised batsman left.

In extraordinary scenes, Australia’s last two batting partnerships managed 124 runs. That set Pakistan the relatively easy target of 176 runs to win. But they were bowled out for just 139 and lost.

There were widespread accusations of cheating at the time.

Three of the dropped catches were off the bat of Michael Hussey, who went on to score 134 not out.

But today we provide evidence from vile Majeed’s own mouth.

To the astonishment of our undercover team, he provided detail of how the test WAS rigged and how crooked gamblers pocketed 1.3million dollars (£837,000) from it.

The part-time Muslim TV channel presenter opened up during a meeting in our car outside the Bombay Brasserie restaurant in Gloucester Road, west London, on August 18.

Explaining the scam he said: “Let me tell you the last test we did. It was the Second Test against Australia in Sydney. Australia had two more wickets left. They had a lead of ten runs, yeah. And Pakistan had all their wickets remaining.

“The odds for Pakistan to lose that match, for Australia to win that match, were I think 40-1. We let them get up to 150 then everyone lost their wickets. That one we made 1.3. But that’s what I mean, you can get up to a million. Tests is where the biggest money is because those situations arise.”

Majeed then continued to detail how he runs his slick operation.

Reporter: “Do we get information like there will be three no-balls in the third over?”

Majeed: “Of course, everything. And you get the indication to show if it’s on or not. They’ll change gloves at a certain point.”

Reporter: “You will be relaying it.”

Majeed: “Yeah, it all comes through me. We don’t do results that often. The last one we did was against Sri Lanka in the Asia Cup which was about two months ago. And you get a script as well.”

Reporter: “What does that mean, a script?”

Majeed: “This bowler is going to concede this many runs, this batsman will do this.”

The spoils of Majeed’s sordid trade have brought him a life of luxury in which he mixes with superstars of film, TV and sport. At the August 18 meeting, he boasted how he was involved in movies and name-dropped stars.

He claimed: “Our production company used to do all the generic TV adverts for Showtime Arabia. Showtime is the largest TV network in the world. We made a film in 2006 called Paradise Now which won an Oscar and Golden Globe. Went down really well.”

During an earlier meeting at London’s Hilton Park Lane, the slippery crook even name-dropped celebs he could invite to a launch party for our investigator’s “business venture”. Majeed boasted: “I know a lot of footballers and I know a lot of English actors as well.”

He then added that he knew one of the most famous Hollywood actors “very well.” The News of the World is not naming him but he is a global superstar.

Majeed also bragged of knowing one of the world’s top tennis players and claimed he had arranged for Salman Butt to be in pictures with pop stars and a world famous US rapper. It was during the Bombay Brasserie meeting that he revealed the Oval test being played at the time against England was fixed.

“I give out the information the night before or morning. What’s going to happen at the end of the fourth day. But we now are not going to do any results for the next two games because we want Salman Butt to be captain long term.” Then he outlined the prices bookies pay him for his information.

“But in terms of results, depending on who we are playing, sometimes it can be £300,000. The max it can be is £450,000. You can speak to any bookie in India and they will tell you about this information and how much they’ll pay. If you had the information and they knew that it was coming from the source they’d pay you that money themselves.”

He said his prices were justified because he had to bribe senior players. Majeed explained: “If you’ve got six players, they’re taking such a big risk, yeah.”

In an earlier meeting, he had told of the players’ desire to get in on match-fixing. “They will be up for it. I told you they will be up for making money. They need to make money.” His name-dropping and endless bragging was interrupted by phone calls from Pakistan captain Butt and keeper Akmal. But two-faced Majeed wasted no time in having a go about his own players.

He said: “You’ll find there’s only a few players who are genuine and who are actually here for the love of the game and there’s not many believe me. A lot of them are just looking for money, women and food.

“They make money and they need to make money. The problem is if they don’t then they’re not going to have enough money for the rest of their lives. In cricket there’s not enough money.

“How much they’re getting paid is a joke. I came from a football background and I can see the difference in football and cricket. It’s huge.”

Majeed, who runs a property company with a multi-million pound portfolio called Bluesky Developments, also admitted being party to ball tampering, another cheating ruse that has blighted cricket.

He shamlessly claimed: “I used to go out on the pitch to give the players their drinks. Whenever we couldn’t get a wicket I’d have a lump of Vaseline on my hand. Shake their hand. They’d put it on one side of the ball and the ball would suddenly start in-swinging.”

Today, after our astonishing revelations, Majeed’s tampering with cricket has finally come to an end.