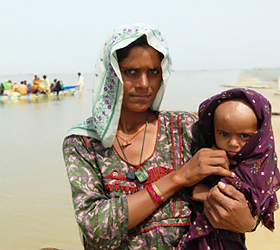 A month after floods devastated the country, small boats still rescue those strong, and lucky, enough to have survived the waters

At first it looks like just another tiny island of ruined and abandoned buildings, poking out of the vast, unnatural inland sea that stretches away into the distance on all sides.

But as the boat edges closer, gliding over the tops of bushes and brushing over raised banks that were once roads, it is clear that this one is different. There are people here, pouring out of their rough shelters, streaming down to the water’s edge, shielding their eyes from the sun, squinting to get a better glimpse of salvation.

It is clear, too, that there are far too many to fit on the two small boats that have been sent to rescue them. They will hold 20 people each, but there are maybe 100 or more standing among the graves in the burial ground – the only piece of land high enough in the village of Bago Daro to remain above the floodwaters of the Indus.

People push and shove to get to the boats, wading through the water, men lifting children onto the wooden benches, women with babies clambering over the sides. A few men elbow their way through the mass of bodies and hold their ground: those women and children not strong enough to compete are left behind.

It is all over in minutes, the boatmen pulling on the cords to start the outboard motors, the boats pushing backwards and away. Those not strong or lucky enough to grab a place stand and watch in despair. In the water, a little boy stands bewildered. He does not cry, or wave, or show any emotion. He just stands there, staring blankly, receding into the distance. And then he is gone, obscured by the top of a tree, and the boats are once again out on the open water, heading for the city of Shahdadkot and what amounts, in the flood-ravaged province of Sind, to safety.

Most of the villagers have never been on a boat before. They sit quietly for a while, then start to talk.

It was five days ago that the water arrived, five days that they have been trapped by the rising waters. They had been asleep in their houses, says Nawabi Khatoon, when they realised. They had heard no warnings, she says, cradling the youngest of her four children, one-year-old Zenat. No-one told them their homes, miles from the river, were in the slightest danger.

They have been drinking the flood waters, she says, because there was nothing else. They had no food, no medicines. Her husband is missing, along with their animals. She has no idea if they are alive or dead.

They grabbed what they could, says Shabeer Ahmad, and waded through the rising water to the highest ground they could find: the graveyard. One person drowned, he says; others are very ill. The very sick were not among those who managed to fight their way onto today’s rescue mission.

A month into the unfolding disaster, hundreds of thousands of people are still being forced to abandon their homes, fleeing before a fresh surge of water swelling the already overflowing Indus as it rushes towards the sea. High tides have slowed the rate at which the Indus can empty into the Arabian Sea. Hundreds of thousands of people were still being evacuated this week from areas of Sind, including around Shahdadkot and Hyderabad. An estimated 3.6 million people are homeless in Sind alone.

That morning, the boat pushed off two hours late at 9.45 from the levee on the outskirts of the city. First the boatmen were late, then there was no fuel, then there was a crush of men wanting to be ferried back to their villages to retrieve possessions.

Behind the levee, towards the city, the land was mostly dry. In front, there was only water and the tops of trees poking out as far as the horizon. There should be no water here, but a breach in a canal has inundated the vast plain, wiping out villages, livestock and crops, everything that stood in its way.

Local agency NGO’s Development Society, a partner of the UK’s Action Aid, has rescued about 650 people so far over the last week, Ghaffar Pandrani told me as we sat in the rear of the boat. “They don’t have support from our government or anyone. We are only a small group; we can’t help them all,” he said.

The journey to Bago Daro covered 35km and took the best part of three hours. There was no shade in the boats and the water quickly ran out. The bottom of the boat quickly filled with water and had to be bailed out every few minutes.

The sheer scale of the flood became clear as we headed further away from Shahdadkot. A few broken buildings poked above the surface, but the only signs of life were the water birds and four dogs trapped on a broken levee. They ran backwards and forwards, barking frantically as the boat passed.

By the time the boat returns to Shahdadkot, it is 3.30pm. Yasin Brohi watches it pull up to the levee. The 45-year-old was rescued two days ago with his wife from a scrap of higher ground. It took less than half an hour for his house to disappear. “All we have left is our lives,” he says.

A cloud of flies has settled on two-year-old Ambreen Magsi and her brother and sisters. They sit or lie listlessly in the heat of a schoolyard in the abandoned city, where once more than 100,000 people lived.

Shahdadkot’s streets are virtually empty, the shops shuttered, a few dogs trotting down the dusty lanes. Ninety per cent of the population has gone, fleeing ahead of the advancing waters.

Ambreen’s mother, Nawabzadi, flicks at the flies, which rise up and settle again on her one-year-old sister, Samreen, lying asleep on the concrete. They were at home a week ago when they spotted the water rushing towards their village, Haibat Magsi. Within a couple of hours, it was surrounded. Muzir Ahmed Magsi packed his family onto a tractor and they fled.

“It was so fast rising: it took only a couple of hours,” says the 35-year-old, shaking his head in disbelief. “I saw the water in the fields and we got on the tractor and went as fast as it would go.” When they looked back, the water was closing over their home.

Everything they ever had has gone, not that it was much to start with. “We are waiting for God to help us because there is no support from the government,” Muzir says.

They were farmers. Now they sleep in the schoolyard and wonder what will become of them. They will have to find work as labourers, he says, and try to slowly start again. All gone, he says, and looks away.

An old man and his wife appear in the distance along the levee. Mushtaq Jamali leans heavily on a stick; Islam Hatoum has a few possessions tied in a cloth. Behind them, a digger is pushing more earth up against the bulwark that is all that stands between the city and disaster. Slowly, they make their way towards the point where the boats are tied up. They are confused, hot, disconsolate. They have left their animals behind on a piece of dry ground and tottered along the railway line, and then on to the levee. They want someone to help; they cannot understand why no help has come.

The UN estimates that 800,000 people remain trapped in areas accessible only by air. A fifth of the country is under water. As many as 5 million people have no shelter at all. Sind alone has 1,800 makeshift relief camps, housing about 700,000 people. Disease remains a significant threat and the numbers needing food aid are rising daily. To complicate matters further, the Taliban threatened last week to target what it called the “unacceptable horde” of foreigners involved in the relief efforts.

President Zardari has said recovery will take at least three years. Those in Sind cannot see that far ahead. The planting season is nearly upon them, but there is nowhere to plant. Without crops, there will be no food.

Though the death toll has remained markedly low for such a disaster, at an estimated 1,600, more than 1.2m homes have been damaged or destroyed, and many families have lost everything they owned. For many farmers, the loss of their animals is the cruellest blow: they can rebuild their homes, but their animals represented their real wealth.

Action Aid, which is helping to evacuate those stranded around Shahdadkot, is one of 13 aid agencies that make up the Disasters Emergency Committee. Donations can be made at www.dec.org.uk or by telephone on 0370 60 60 900 – Guardian