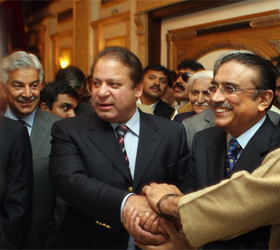 WASHINGTON, Aug 27 (APP): The United States, in a reaffirmation of its support for democratic process following MQM chief Altaf Hussain’s controversial proposal on martial law, has said civilian set up is the best form of government for Pakistan.“Pakistan has a civilian government and we think it is the best form of government to take,” Philip J Crowley, Assistant Secretary of State for Public Affairs, said.The spokesman was asked at the daily briefing to comment on Altaf Hussain’s statement that he would favor martial law if it could help resolve some of the problems facing the country currently.

The United States has been supportive of democratic progress in Pakistan since 2008 elections, which saw the return of democratically elected government and parliament in the country – APP
Twitter Facebook Google + Linkedin Comments