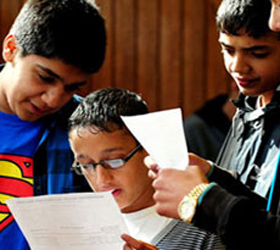 LONDON, Aug 26 (APP)- A talented 10-year-old  British Asian boy of Pakistani descent has become the youngest person ever person in the UK to be awarded the new A star grade after taking his maths A-level examination whose results were announced earlier in the week.Zohaib Ahmed, a resident of Hampshire on the south coast, already enjoyed the distinction of being the youngest person ever in the UK to get an A in the subject last year just days before his ninth birthday.

But he sat it again this year especially to gain one of the new A* grades. Last year, he beat the record held by Hong Kong prodigy March Boedihardjo, claiming an A grade with a mark of 90%.
The record-breaking pupil also achieved a top grade in a further maths examination in March this year.
His proud mother, Saadia, told  media that her son wants to go to university as soon as possible. “The plan is for him to go at 14.  After that he wants to become an actuary.”
Zohaib’s older brother Wajih, 11, also stands out with his academic performance and scored 96% in his further maths A-level examination in 2009.
Last summer, the maths geniuses were congratulated by former Prime Minister Gordon Brown for their ‘smashing mathematical achievements’ – APP
Twitter Facebook Google + Linkedin Comments